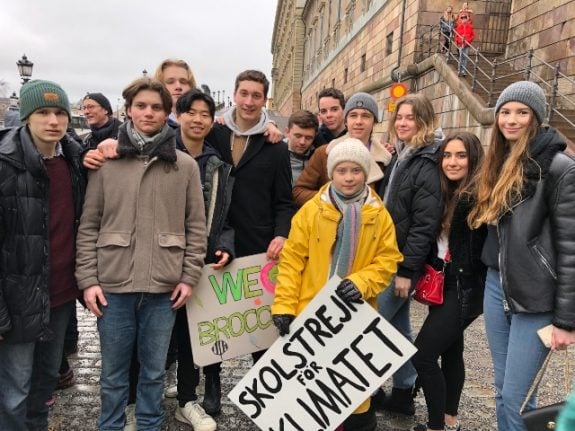 “The school is fantastically situated, so every day just walking from classroom to classroom or to the lunch hall, you see beautiful nature and that certainly has an impact on the way we think about the environment and the world around us,” he told The Local.

The tenth grader, who is one of around 185 boarders who live on campus, said that being at SSHL has strengthened the environmental consciousness drilled into him from an early age by his Swedish-Norwegian parents.

My parents always taught me to be mindful of the environment because we only have one planet. They’ve always been eco-conscious and made efforts to decrease their carbon footprint and I continue to be as environmentally-friendly as possible,” he said.

Born in London and raised in Norway, Steffens moved to Sweden one year ago. Because his parents travel a lot for work, they decided to enroll him at SSHL, something he says “was a very good choice”.

Like Steffens, 16-year-old Juliette Sakmar Åberg is also a fairly new arrival to SSHL. She too was completely taken by the school’s natural surroundings.

“I grew up in New York City, so I wasn’t really raised around a lot of nature. When I moved here three years ago, it was quite a shock for me,” she said. “The campus is gorgeous, and I’ve found myself being outside more and caring more about my environmental surroundings.”

Åberg said she was also immediately impressed by the school’s approach to environmental issues and its wide array of student organizations that focus on the environment.

“I’ve always been interested in environmental issues, but coming here heightened my understanding of what we as young people can do and the small steps you have to take to make things better,” Åberg said.

READ ALSO: The Swedish school with an international outlook

Of course, one can hardly talk about young people, Sweden and the environment without immediately thinking of Greta Thunberg, the 16-year-old activist who has arguably done more for the climate movement than anyone else on earth. Thunberg’s climate strikes have spread worldwide and she has spoken truth to power across Europe, including a star-making turn at the COP21 climate summit in Poland.

With SSHL’s focus on the environment, it’s little surprise that the school not only supported but actively arranged for students to attend the March 15 climate strike that drew nearly 1.5 million students from well over 100 countries.

Around 150 of SSHL’s 420 high-school-aged students, including Åberg and Steffens, took the train to Stockholm that day to join the global movement. Both said it was an incredible experience.

“I thought it was important to join because I am under 18 and can’t vote so I thought it was a great way to exercise my democratic rights and to be out there making a difference, no matter how small,” Åberg said. “It was so inspiring to see so many people out there who care about the same cause as you and are willing to fight for it.”

“One person standing alone is very weak but if you’re a community together standing together  you can make an impact,” Steffens added. “It was important for us to be there that day, because there were so many politicians coming. We stood together as a community and hopefully impacted the future.”

Find out more about life at SSHL

The need to take matters into your own hands is something Steffens said he’s felt strongly about since age 12.

“If we want a better future for ourselves, we have to create it. We can’t just rely on others to do it for us. We have to personally try to make a change for the better,” he said.

The SSHL students’ participation at the climate march was organized in part by Ian Gavin, the school’s vice principal in charge of its nearly 100 international students. Like other faculty members there, he thought that the lessons his students could learn by joining the climate march in Stockholm would be invaluable.

“To be a part of a genuine movement is a really great opportunity because these types of things don’t come around that often and they certainly don’t gain momentum like this one,” he said.

Gavin said he ran into both Åberg and Steffens on the way to the train station after the strike and he could clearly see that they had been genuinely moved by being a part of it.

“They were really inspired and nothing is as inspiring as an educator as seeing the students that you work with being inspired,” he said, adding that many of his students “were almost starstruck” after having met and exchanged email addresses with Thunberg.

READ ALSO: Sigtunaskolan: ‘The best of what Sweden has to offer’

Both Åberg and Steffens said that seeing a Swedish teenager like Thunberg have such an enormous global impact was inspiring to them.

“It’s really cool to see someone from my country and from my age group create something as massive as she’s done and reach a global audience,” Åberg said.

Gavin said the students’ enthusiasm for the climate strike was just one of the many ways that being around the young minds at SSHL gives him “a lot of renewed hope” for the future.

As a transplant himself, Gavin said that he has come to appreciate just how important nature is to Swedes since moving to the country from Manchester, England nine years ago. A sense of “oneness with the environment and also those around you” is just one of the Swedish values he hopes students pick up at SSHL.

“One of the things we try to do is to promote the best of Sweden. For a country of its size, it has a huge impact on issues like climate and diplomacy. We want students to experience that and take that away with them,” he said.