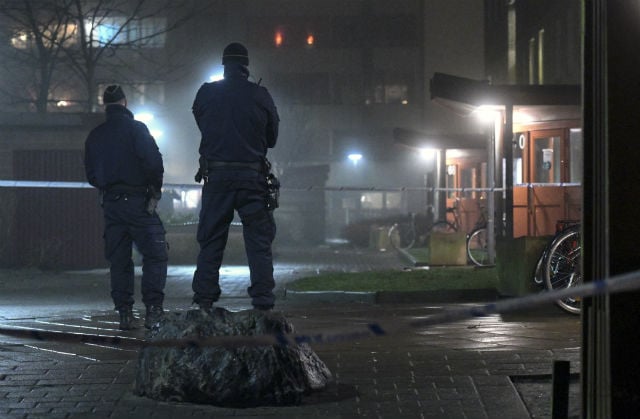 People in Fosie feel most afraid out at night. Photo: Johan Nilsson/TT
People living in the city were slightly more likely than those living elsewhere in Sweden to report being victims of a crime.
They were also more likely to describe themselves as feeling “unsafe”, or “very unsafe”, in answer to nine out of 13 questions asked by the latest issue of the Swedish Crime Survey, from years 2017-18.
“We can see that there is a part of Malmö where a lot of people are exposed to crime and also feel concerned when they go out at night,” said Sofie Lifvin, who carried out the survey, told The Local.
In the district of Fosie, a full 65 percent of respondents said they would feel “unsafe” or “very unsafe” to be out alone late at night in their area, the highest proportion of any district in Sweden. For Rosengård, another district with a reputation for being troubled, the share was 60 percent.
Across Sweden as a whole, an average of 28 percent said they would feel “unsafe” or “very unsafe”. Regional differences were stark, from 33 percent in the southern police region to 18 percent in the more sparsely populated northern police region. Sweden is home to seven police regions: northern, central, Bergslagen, Stockholm, eastern, western, and southern.
READ ALSO:
However, despite the high fear of crime in the Fosie and Rosengård areas, people living there were no more likely than people living elsewhere in Malmö to report having been victims of a “crime against an individual”. This category includes assault, threat, sexual harassment, mugging, pickpocketing, fraud, harassment and online bullying.
Some 28.5 percent of people living in Fosie and 28.8 percent of people living in Rosengård said they had been victims of such crimes in the year leading up to the survey, less than in the prosperous suburbs of Oxie and Bunkeflostrand, but in line with the average for Malmö, which was 29 percent.
The highest reported incidence of such crimes was in Södra Innerstaden, which includes the popular restaurant and bar district of Möllevången, where a full 33.8 percent of people said they had been victims of crimes against the individual, the highest proportion of any district in Sweden, and well above the national average of 23.8 percent.
The worst district in Sweden for burglary was also in Malmö, with 30.4 percent of people in the district of Kirseberg saying they had been victims of “crimes against a household”, which includes burglary and car or cycle theft.