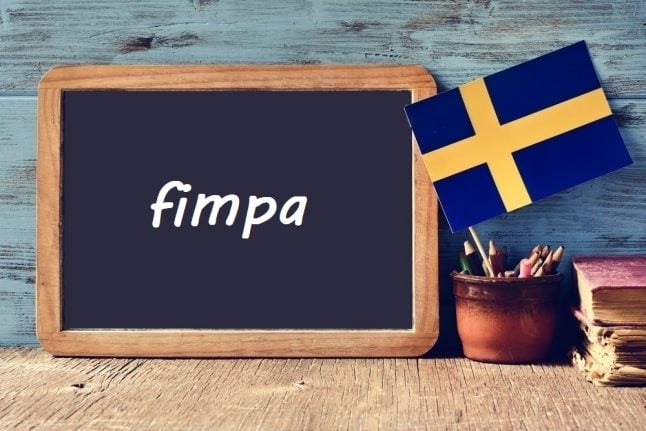 Fimpa means ‘to stub out’, and is usually used to talk about putting out a cigarette. The related word fimp or cigarettefimp means ‘cigarette stub/end/butt'.

It has a slightly odd origin, coming from fikonspråket (literally ‘fig language’), a Swedish code language. To create a word in fikonspråket, you split the word after the first vowel, reverse the order of the two parts of the word, and add the prefix fi– to the first part and the suffix -kon after the second.

Confused? Well, that’s sort of the point. But in fikonspråk, the word stump ('stub/cigarette end') would be split into stu- and -mp, and would then be transformed into fimp stukon. This got shortened to fimp, meaning ‘stub’, and then turned into the verb fimpa (to stub out).

In fact, fimp may well be the only word from fikonspråket that has become a fixed part of the standard Swedish language, or at least it's the only word recognized by the official dictionary as having such an origin, which makes it quite a special Swedish word.

Rose's mum would like her to fimpa. via GIPHY

There are two other uses of fimpa which are handy to know.

Firstly, it can be used as a general term to mean ‘to stop/quit smoking’, for example 'politikerna vill få alla att fimpa' ('the politicians want to get everyone to stop smoking').

And secondly, it can be used as a slang term to mean ‘to dump/to break up with’, in the sense of ending a relationship with someone. It’s a transitive verb, meaning it’s used with an object and no preposition, for example jag ska fimpa honom (I will break up with him) or han ville fimpa mig (he wanted to dump me). When you're using fimpa to mean 'to stub out a cigarette', it can be used without an object (fimpa) or with an object (fimpa cigaretten/ciggen).

The reason we’ve selected fimpa today is because it’s in the news due to Sweden’s new smoking ban, which forbids smoking in outdoor public areas such as bar and restaurant terraces, football pitches, and bus or train stations.

This means that people will need to fimpa before they enter these areas, and the city of Malmö in southern Sweden has even introduced three fimpzoner (stub-out zones) to help smokers remember and adhere to the new law.

READ ALSO: What you need to know about Sweden's new smoking ban

When you smoke in a forest, you have to stub out the cigarette carefully

In a national campaign, the Finnish state wants to get the population to quit smoking 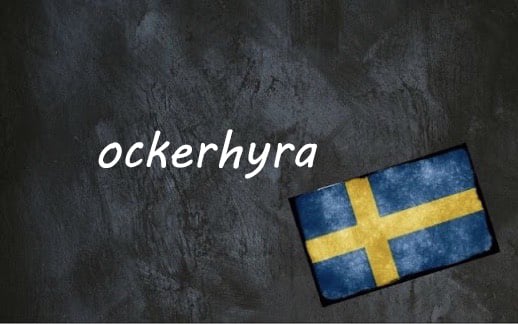 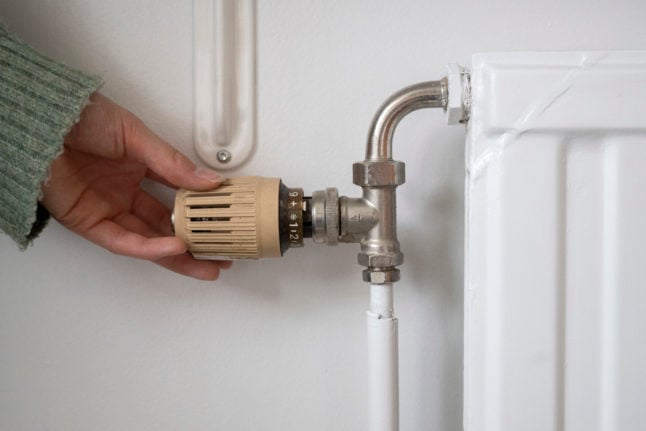 Ocker is the Swedish word for usury, and not the Australian for someone who “speaks and acts in a rough and uncultivated manner, using Strine, a broad Australian accent” for the Aussies out there who might recognise the term.

Usury, of course, is when a lender makes monetary loans which unfairly enrich them. The term is used either in a moral sense, then as a condemnation of taking advantage of others’ misfortune, or in a strictly legal sense, where ocker refers to the crime of charging a higher interest rate for a loan than that which is allowed by the law. You might know an individual who does that not as a usurer, but a loan shark.

But ockerhyra has nothing to do with loans or loansharks, at least not directly. The shark, however, might still be there, as you will see.

Hyra simply means ‘rent’ – in this case the rent you pay for an apartment or any other rental property. So ockerhyra means ‘usury rent’, but how can a rent be usurious? Well, it cannot since it is not a loan. What instead is meant here, is at least part of the moral sense of the word ‘usury’, whereby someone is taking advantage of another’s situation.

Someone setting an andrahandshyra, a second hand rent, which is unreasonably high, would be setting an ockerhyra. This is a topic which The Local has previously dealt with, and there are instances to get help with that. The main reason people can get away with this is because many are desperate to find a place in the city, often Stockholm, and therefore will not alert the authorities. But also, owing to the fact that it is not a punishable crime, all that might happen is that the person subletting their place for more than is reasonable might be forced to pay some money back.

Furthermore, the word ockerhyra does not necessarily imply this type of scenario, it can also be used to generally complain about rents being too high. And many do complain about this.

Do you feel a bit upset about the sometimes absurd rents in Stockholm or in another city? Why not make use of the word ockerhyror in a conversation on the topic?

Just remember that the word is quite strong, so try not to accuse a friend of charging an ockerhyra – might be safer to just question whether they are charging a bit much. Good luck!

I mean come on, the rents on new builds are outrageous! I’m sick and tired of this shit.

Duncan, why are you charging an exaggerated rent on the place you’re subletting?