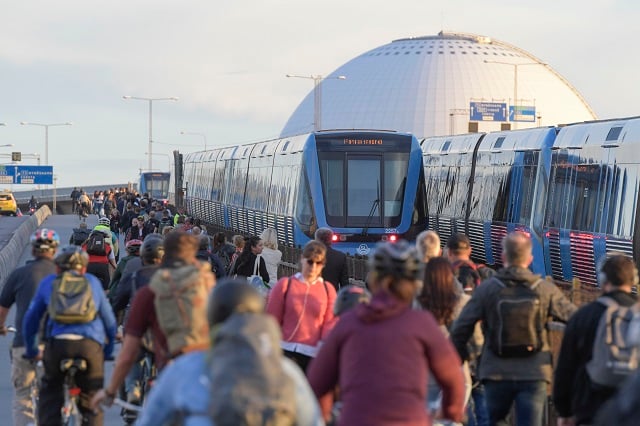 There are disruptions to regional and commuter train lines as well as the subway. Photo: Anders Wiklund / TT
This article is available to Members of The Local. Read more about membership here.

The summer season is chosen for most renovations because fewer people use the public transport system for commuting due to Sweden's long summer holidays, as well as because of better weather and longer daylight hours which facilitate the work.

Still, for those who remain in the city, it can be disruptive, with many of the different modes of transport affected in different locations and at different times throughout the summer season.

The regional train track (which is separate from the pendeltåg track) between Stockholm Central and Stockholm Södra is closed over summer due to planned renovations. Customers therefore need to travel from either Stockholm Södra or Flemingsberg on many regional routes going south from Stockholm. Both stations have been equipped with SJ ticket machines and extra staff, so that you can buy long-distance tickets there.

This includes the lines Stockholm–Gothenburg/Uddevalla, Stockholm–Karlstad–Oslo, Stockholm–Malmö–Copenhagen, Gävle–Stockholm–Linköping, Stockholm–Eskilstuna–Örebro, Stockholm–Katrineholm–Hallsberg, and Stockholm–Nyköping–Norrköping. However, the Stockholm Central station remains open and some trains will continue to arrive and depart from there, including northbound trains to Uppsala, Sundsvall and Kiruna. Make sure you've checked your ticket and/or the SL website carefully. In general, snabbtåg (express trains) will leave from Södra in Södermalm and the InterCity and regionaltåg (regional trains) will be departing from Flemingsberg further south in Huddinge, but there are a few exceptions.

Many thousand passengers are expected to be affected, and even for those not travelling on the affected routes, the two replacement stations will be much busier than usual. The stations are clearly signposted with extra staff on hand to help direct you to your train.

In order to reach the stations, there are several options. The ordinary pendeltåg (commuter train) routes are not affected by this track closure, so you can travel to Södra or Flemingsberg stations from elsewhere in the city, including from Stockholm City (the pendeltåg station which is connected to Stockholm Central).

Depending on where you're travelling from, another route of transport may be more convenient. Stockholm Södra is also within easy walking distance of Mariatorget on the red tunnelbana line and Medborgarplatsen on the green line is about a ten-minute walk away, while six bus routes (4, 74, 94, 55, 57, and 66) all stop close to the entrance.

To get to Flemingsberg, you can take the pendeltåg south, or you can take a combination of tunnelbana and bus (for example, it's possible to take the tunnelbana 19 to Hogdalen and change to bus 172).

Allow plenty of extra time to reach the right station and make sure you've looked up the best route in advance, which you can do using the SL website. Remember that using the pendeltåg, tunnelbana, or bus in Stockholm requires an SL ticket.

The works are taking place until August 18th and will continue each summer over the next two years. Travellers on the pendeltåg lines should be aware of the disruptions outlined above, since this will mean more passengers at Stockholm Södra and Flemingsberg, and busier trains on this stretch.

And it's important to know that, although the pendeltåg doors open automatically through the rest of the year, during summer you need to press the button to open them (this is in order to help maintain a comfortable temperature onboard). The exceptions to this are Stockholm Södra, Stockholm City, Stockholm Odenplan, and Arlanda. Don't miss your stop!

Extensive works are being carried out across the tunnelbana (subway or underground network) to update tracks and platforms and to prepare for work on extending the tunnelbana's blue line. No green line trains are stopping at the Fridhemsplan station in Kungsholmen until September 1st. The blue line is not affected, so passengers travelling to Fridhemsplan should switch at T Centralen or take an alternative route.

South of the centre, work is also being carried out at Gullmarsplan in preparation for a new tunnelbana line. This means that line 19 between Globen and Gullmarsplan is not running until August 17th. Passengers can either switch to the tvärbanan (tram) between the two stations, or walk.

Stations where train and platform changes are taking place are likely to be unusually busy during rush hour, so passengers should be aware of possible delays and check timetables beforehand, as well as signs and loudspeaker announcements at the stations.