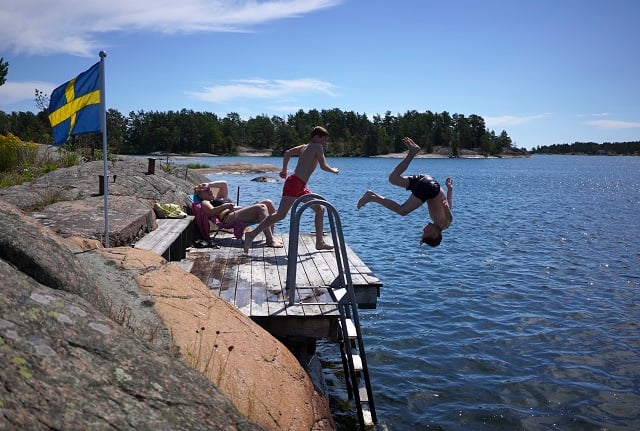 The weather has taken a turn for the worse since this picture was taken in late June in Oskarshamn, Kalmar. Photo: Adam Ihse / TT

“Swedish summer is the best week of the year,” is a well-used joke in the Scandinavian country due to the typically short period of hot weather, even if 2018 brought several months of extreme warm, dry weather.

June this year also got off to a warm start and was the hottest month ever across Europe. Although the continent's extreme heatwave didn't quite reach Sweden, the country still enjoyed warmer than average temperatures including its hottest ever day.

But July has begun with a low pressure area across most of Scandinavia, bringing rain and clouds which are set to linger a little while longer.

Up in Norrland, several towns and villages have experienced their coldest July night in decades, with temperatures several degrees below the average for the season in many places. Coldest was Gielas in Lapland where the mercury dipped to -2C, while Arjeplog's Wednesday morning temperature of -0.5C was the lowest July temperature measured there since 1972.

“We have had cool air over the whole country and it looks like it will persist until the end of the week, so there's quite unstable weather to come,” SMHI meteorologist Moa Hallberg told the TT newswire.

One positive result of the drop in temperatures and the rain showers is that the risk of fire in many locations has reduced significantly. Several local fire bans, including in Stockholm and Uppsala, have been removed in recent days, allowing people to barbecue in public places again. In the capital, up to eight milimetres of rain was forecast for Friday.

But it shouldn't be too long before the temperatures rise again. Southern Sweden and the West Coast will see warmer weather this weekend, and towards the middle of next week, temperature increases are forecast for most of the country.