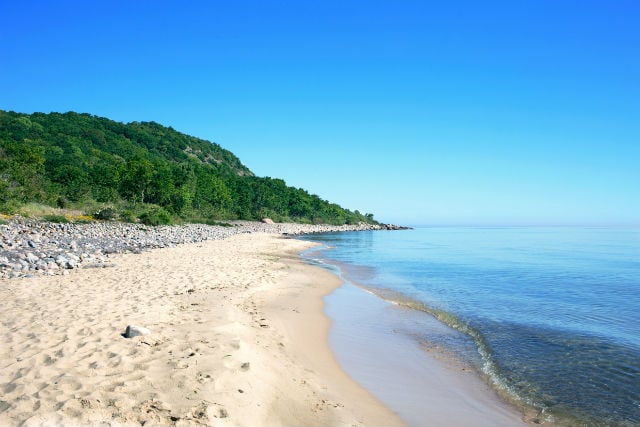 Stenhuvud, a well-known landmark on the Österlen coast, viewed from Knäbäckshusens strand. Photo: Conny Fridh/imagebank.sweden.se
Haväng
North of Kivik, Haväng vies for the title of the best beach in Österlen, the popular holiday area in Skåne’s southeast corner. It combines a stunning stretch of sand with beautiful walks on the Österlenleden and Backaleden trails which cross the meadows and hills behind it.

The beach is cut in two by the Verkeån river. Photo: Jorchr/CC BY-SA 3.0,
The beach is cut in two where the Verkeån river hits the sea, and the meadows are filled with free-ranging herds of horses and cows, which sometimes come right down to the shore. When you get bored of the beach you can wander up to Havängsdosen, a stone-age grave with a sea view. Usually, you can also take a break for a posh fika or lunch at the nearby Vitemölla Badhotell, but unfortunately it’s closed for renovation in 2019. Behind Haväng there are rolling hills and meadows with traditional farmhouses on them. Photo: Henrik Malmqvist/imagebank.sweden.se
Knäbäckshusens strand
Haväng’s chief rival lies just to the southern side of Stenshuvud, the hill that marks the southern end of the Hanöbukten bay. Visitors walk down a winding path from the car park past picturesque thatched cottages to find a long stretch of white sand with a steep, verdant bank behind it.
There’s a risk of dangerous undercurrents in bad weather, but it’s so shallow (and the water is normally quite chilly) that it’s unlikely you’ll get out deep enough to be at risk. Tasty pancakes at the Franskans Crêperie in nearby Rörum are the perfect end to a day here.

The trees at Knäbäckshusens strand go in places right down to the sea. Photo: Mikael Tannus/VisitSkåne
Ribersborg
Malmö’s very own beach gets packed on sunny days, but the swimming piers make it great for a midday dip, while the dunes provide enough protection from the wind to have a beachside barbecue.
And this year Malmö’s city government has splashed out 2.2 million kronor on Urban Beach, a whole program of summer entertainment that includes a floating obstacle course, a food truck, circus acrobats, dancing, trampolines, and places to hang out. Visitors can can also play mini golf at Ribban Gold Green, and buy hot dogs and ice creams at the regular kiosks spread out along the cycle path that runs behind the beach. The jetty. Photo: Jaque de Villiers/imagebank.sweden.se
Skanör-Falsterbo
The upmarket housing around the Skanör peninsular means you’re not exactly in the wilderness, but once you get out on the white sand of Skanör, it’s one of the best beaches in the county. The beach tends to be windy and the surrounding sea is often spotted with windsurfers and taking advantage of it.
There are also cute wooden bathing huts all long the beach. If you’re feeling flush, you can eat at the popular Badhytten restaurant by the beach, or for adventurous types, there’s the option to rent kite-surfing kit and get lessons from Ksurf. The beach huts at Skanör are painted in a variety of appealing colours. Photo: John Sander/Imagebank Sweden
Mossbystrand

Its claims to be the “Riviera of the South Coast” might be a slight exaggeration, but Mossbystrand is a very fine sandy beach on the very south of Skåne near the old fishing village of Abbekås, with a nature reserve behind it. Its closeness to Trelleborg and Skurup means it can get a lot of locals on afternoon visits, but on some days you’ll almost have it to itself. Mossbystrand Kiosk sells ice cream and sand toys, but also smoked fish and filling meals served with chips or mashed potato.