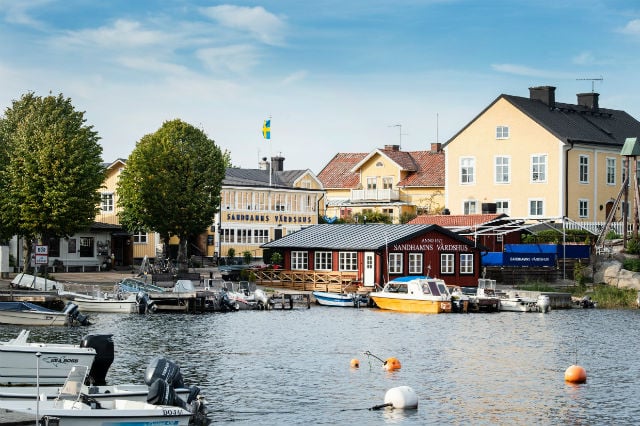 Sandhamn attracts Stockholm's monied elite. Photo: Anna Hållams/imagebank.sweden.se
Stockholm police dispatched a police boat to the island shortly after 4am on Saturday morning, with officers seizing the man shortly afterwards.
Mats Almquist, a press spokesman for the Stockholm police, told The Local on Saturday morning that the boat had left the island and was now taking the suspect to the Västberga police station in the south of Stockholm for questioning.
“They've already been there and they're on their way back,” he said. The suspect, he said, was “around 30 years old” and the reported victim was “around 20 years old”.
“They have met before but they are not friends or from the same party or anything like that,” he added.
Sandhamn is the outermost island in the Stockholm Archipelago. Photo: Google Maps
Sandhamn, on the outer edge of the Stockholm Archipelago, is one of the most exclusive islands, its harbour crammed with yachts in the summer and champagne flowing in its quayside restaurants.
The chief executive of the hotel where the reported rape took place told the Expressen newspaper that he had no information on what had happened.
“The only thing we know is what the police have told us, and that's that there was an incident at the hotel during the night,” he said.
Sandhamn, like most of the islands in the archipelago, has no permanent police presence, and is instead watched over by a police patrol boat.