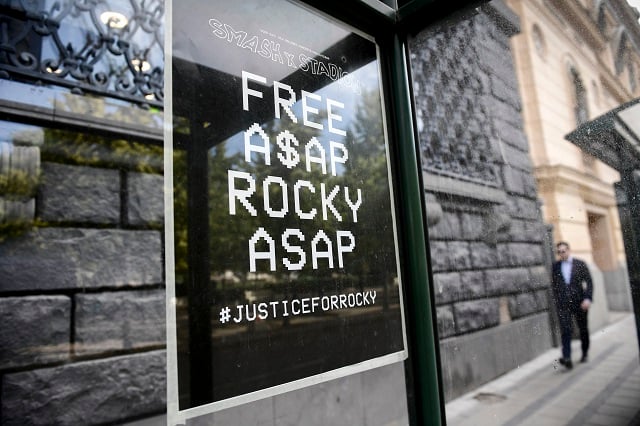 A poster in Stockholm calling for the rapper to be freed. Photo: Stina Stjernkvist / TT

“The deadline to press charges has been extended to Thursday July 25th at 11 am (0900 GMT). The suspect will until then remain in detention,” the district court said in a statement.


The 30-year-old artist, whose real name is Rakim Mayers, was arrested on July 3rd shortly after midnight along with three other people following a street brawl in Stockholm on June 30th. On July 5th the Stockholm District Court ordered that he should be kept in custody while the case was being investigated, as he was considered a “flight risk”.

The court had initially given the prosecutor until July 19th to decide on whether to press charges.

Mayers' lawyer Slobodan Jovicic told Swedish tabloid Expressen last week that he thought the key to having the detention ruling reversed in a new hearing was to either find evidence that Mayers was not a “flight risk” or argue it was no longer proportionate to keep him in custody, should the investigation go on.

“The court could hold the position that two weeks is OK, but not more than that,” said Jovicic.

The rapper has claimed he was acting in self-defence, reacting to the provocations of two young men who harassed and followed him and his entourage. Part of the incident was captured in a amateur video published by US celebrity news outlet TMZ. In the video, the rapper, who was in Stockholm for a concert, can be seen throwing one of the men into the street and then aiming several punches at him while he is down.
Mayers posted his own videos on Instagram on July 2nd which he said showed the lead-up to the clash.

In those, the young man can be seen arguing with the musician over a pair of headphones, and the artist repeatedly asks the man and his friend to stop following them.

One of the young men can also been seen hitting a member of the artist's entourage. According to the Swedish Prosecution Authority a separate investigation into assault and harassment committed by the plaintiffs is also ongoing.

Rapper Travis Scott shouted “Free Rocky” at a recent London concert where ASAP Rocky had been scheduled to perform. Some artists have singled out Sweden — rapper Tyler, The Creator tweeted “no more Sweden for me, ever”.

US media reported on Thursday that reality television star Kim Kardashian West, who has recently campaigned for criminal justice reform, had contacted the White House over the case. Several members of the US congress have also called for the rapper's release.

Former US ambassador to Sweden, Mark Brzezinski, told Swedish newspaper Dagens Nyheter that he had contacted the country's foreign ministry and the Swedish royal family, calling the rapper's arrest a matter of “racial injustice”. Sweden's foreign ministry responded by saying the Swedish justice system was independent from the government.

READ ALSO: How reported crime rates changed in Sweden in 2018

Fans of the rapper have also been enraged by claims that the artist was being held in “inhumane conditions” — allegations made by the artist's manager as well as a TMZ report quoting anonymous sources.

However the director of the remand prison where he is being held quickly denied the claims, adding that the facility had been recently refurbished.

Mayers' then lawyer Henrik Olsson Lilja also told Swedish media he was “being treated in a correct manner”.

ASAP Rocky was born in New York and had a breakthrough in 2011 with the release of the mixtape “Live. Love. ASAP”. He followed that up in 2013 with the debut album “Long. Live. ASAP”.