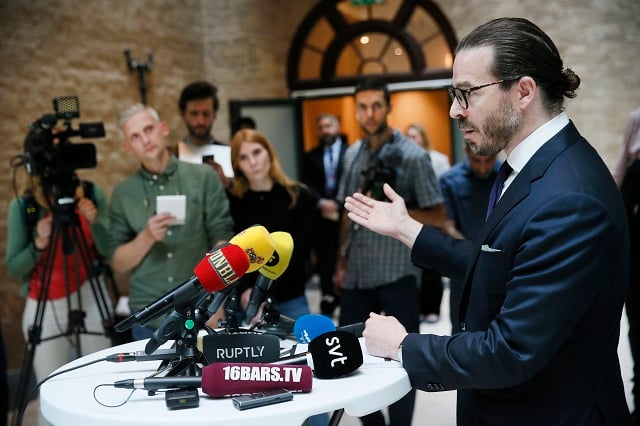 The fight between two men and ASAP Rocky and his entourage in Stockholm on June 30th led to the July 3rd arrest of the rapper, who has been detained since on suspicion of assault.

Parts of the brawl were captured on a video published by US celebrity news outlet TMZ which showed the rapper tossing a young man to the ground.

But the 30-year-old New York rapper, whose real name is Rakim Mayers, posted his own videos on Instagram showing the lead-up to the clash. In those videos the young man can be seen arguing with the rapper, who repeatedly asks the man and his friend to stop following them. The young man can also be seen hitting the rapper's large bodyguard with a pair of headphones.

Following Mayers' arrest, the bodyguard filed a counter-complaint against the man claiming to be a victim, accusing him of harassment and assault. However the Swedish Prosecution Authority announced on Monday it was dropping the investigation, saying the man's actions were in self-defence as he was being pushed and that the bodyguard — or “counter-plaintiff” — had grabbed his throat.

“In this situation the person throws his headphones at the counter-plaintiff and tries to punch, which can be considered part of his right to self-defence,” prosecutor Daniel Suneson said in a statement.

The investigation has been ongoing alongside a probe into Mayers, who is suspected of assault but has not been charged.

On July 5th the Stockholm District Court ordered that Mayers be kept in custody for two weeks while the case was investigated as the rapper was considered a “flight risk”. Last Friday the prosecutor requested more time to finish the investigation and was granted a extension until Thursday.

Since his arrest, fans, fellow artists and US Congress members have campaigned for the artist to be freed.

US President Donald Trump also weighed in on the case over the weekend by contacting Sweden's Prime Minister Stefan Löfven. Trump on Saturday tweeted that Löfven had assured him that ASAP Rocky would be “treated fairly”.

“Likewise, I assured him that A$AP was not a flight risk and offered to personally vouch for his bail, or an alternative,” Trump added.

Löfven's press secretary Toni Eriksson confirmed that the call had taken place and told AFP that “the Prime Minister was careful to point out that the Swedish justice system is completely independent”.