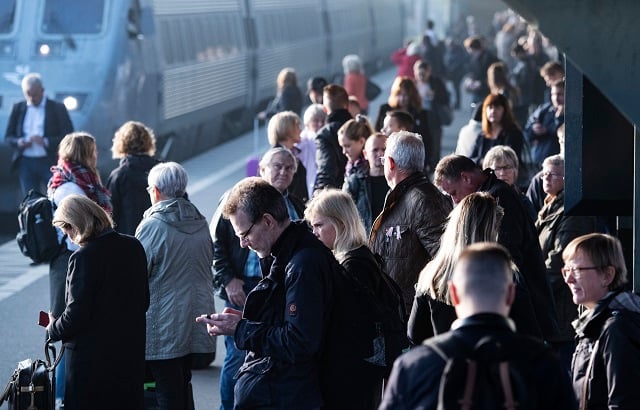 During June, three out of every ten of Sweden's long distance trains were delayed, according to the Swedish Transport Administration, and last weekend thousands were affected by problems in southern Sweden.

In Sweden, you can apply for compensation in many instances, and will sometimes be refunded the entire cost of your ticket plus expenses, but not everyone claims the refunds they're entitled to.

READ ALSO: The ultimate guide to exploring Sweden by train What are the main causes of train delays?

Sweden has set a goal of 95 percent punctuality for train punctuality, but the reality is a long way off that. Throughout the whole of 2018, only 77 percent of long distance trains arrived on time, meaning that there were thousands of missed connections and potentially disrupted plans.

Extreme weather is a big cause of delays: the wildfires in the summer of 2018 led to a lot of problems for trains which had to avoid the affected areas, delaying many journeys by many hours.

Problems with infrastructure, including signal failures, track problems, and issues with the vehicles themselves, can also cause delays.

And sometimes the disruption is due to humans, such as people entering the railway tracks, especially near the bigger cities, or even a shortage of staff for the train.

How do I know if my journey is covered?

There are a few factors to take into account, most importantly the total distance of your journey and the length of delay. It's always the time you arrive at your final destination which is used to measure the delay, so if your long-distance train leaves late but makes up some of the time before you arrive, you may not be entitled to compensation.

A delay of over 20 minutes on a short-distance train journey (less than 150 kilometres total) usually means you're entitled to at least a 50 percent refund, and on longer journeys you need to be delayed by over an hour to be entitled to compensation. What compensation am I entitled to?

This depends on the distance of your journey and length of the delay. The distance is measured in Swedish miles (mil), equivalent to 10 kilometres, and the journey is measured between the train's first and last stations, even if you only travelled on a smaller portion of it.

On a journey less than 15 mil (150 kilometres), you are entitled to compensation under Swedish law if it is more than 20 minutes delayed. For a delay of 20-40 minutes you are entitled to a refund of 50 percent of the ticket price, which increases to 75 percent for a 40-60 minute delay, and a full 100 percent refund if you're delayed by over an hour.

On these short journeys, if you're delayed by at least 20 minutes you also have the right to arrange your own alternative form of transport and claim compensation for additional costs, such as a taxi fare. There is a cap on how much you can claim for this, which is around 1,170 kronor.

On a journey over 15 mil (150 kilometres) or which goes overseas, you are covered by EU law. This means you are entitled to compensation if the journey is cancelled or it is delayed by more than an hour. For a 60-120 minute delay, you can get 25 percent of the ticket price refunded, and for a delay of over 120 minutes, you can apply for a 50 percent refund.

If you travel with an SJ Monthly ticket, you are entitled to the same proportions of compensation, and the price of the trip is calculated by dividing the monthly ticket price by 22.

Am I entitled to any other benefits?

You're also entitled to updates and information about the journey, such as new estimated arrival times and help planning connections, from the rail company.

And for journeys delayed by over an hour, you're entitled to free food and drink, which might be offered at the station or on the train. These freebies are supposed to be 'proportionate' to the length and timing of the delay, so for a one-hour delay it might just be water and a small snack, while in the event of longer delays you might get something more substantial. If you're significantly delayed and aren't offered a meal, you can still submit a claim for a refund for a meal.

If you have to stay overnight somewhere because of the delay, for example if you miss a connection to your final destination, you're also entitled to a refund on your accommodation costs. And if the train is unable to take you to the destination for which you booked a ticket, they are obligated to ensure you can get there, for example by ordering a taxi.

As a general rule of thumb, you can usually be reimbursed for food, drink and accommodation costs incurred as a result of a significant delay (more than one hour), but not for other costs, such as missed events or flights. Are there any exceptions?

You aren't entitled to compensation if you were informed of the delay before you bought the ticket, for example in the case of planned track work.

What about local trains, trams, subways and buses?

If you were delayed on local public transport, you need to contact the company responsible, for example SL in Stockholm and Skånetrafiken in Skåne. These are generally covered by the same Swedish law that applies to shorter journeys, as outlined above, but there are some minor differences.

As an example, in Stockholm if you are delayed by over 20 minutes on an SL journey, you can either apply for a refund for the full cost of the journey, or arrange your own alternative transport for which you can be reimbursed up to 1,165 kronor.

If you have a monthly (or annual) public transport pass, the exact way that compensation is calculated can vary slightly from company to company. And some local companies might have slightly different rules: for example, Skånetrafiken allows you the option of receiving compensation as a voucher for future travel, in which case you get an extra 30 percent in compensation.

How do I apply for compensation?

If you travelled to or from Denmark, how to apply depends on whether the delay occurred on the Swedish or Danish part of the route. If it was on the Swedish side, make your application with Skånetrafiken here, and if it was on the Danish side, you can apply to DSB, Metro or Movia depending on where it occurred. The exception is if you travelled on the Öresundståg using a JoJo Period ticket which you bought via Skånetrafiken, in which case you apply to Skånetrafiken for compensation no matter where the delay took place.

It typically takes up to four weeks for the money to arrive in your account, with the exact length of time depending on a few factors including the company responsible.

If your claim is rejected, you can contact Sweden's National Board for Consumer Complaints (ARN) if the amount is at least 1,000 kronor. Many municipalities also have a specialist consumer advisor who may be able to help you.

READ ALSO: What are my rights if a flight is cancelled or delayed?