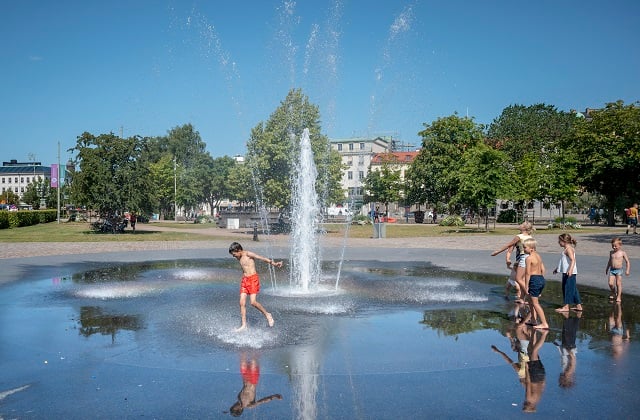 Children play in a fountain to cool down in Gothenburg. Photo: Björn Larsson Rosvall / TT

Thursday's high temperatures of around 30C across most of Sweden were persisting on Friday and the heat is forecast to last at least until the end of the weekend.

“It's getting really hot today, and in many places it's going above 30C. The highest temperatures will be in eastern Norrland, Värmland, northwest Götaland and eastern Svealand,” SMHI meteorologist Emelie Karlsson said on Friday morning.

Heat records have already been broken, with Ljusnedal in Härjedalen, central-northern Sweden, recording its hottest temperature in 93 years when it reached 29.4C on Thursday.

And so-called tropical nights were recorded on four islands and two spots in Örebro county on Thursday night. This means that temperatures did not drop below 20C at night, and more tropical nights were forecast for Friday night along parts of the Norrland coast and West Coast.

SMHI has issued Class 1 warnings (the lowest level on a scale of one to three) for very high temperatures along the Norrbotten coast and in Västerbotten, Västernorrland, Uppsala, Västmanland, Södermanland and Stockholm County.

And medical workers across the entire country have received “high temperature notifications”, which are issued when the maximum daytime temperature is expected to be at least 26C for three days in a row.

“Swedish people generally think that temperatures between 26C and 30C are nice. But high temperatures can be dangerous for at-risk groups, such as elderly people and young children,” Emelie Karlsson said.

“It will be hot throughout the country, not just in the areas that have Class 1 warnings. The reason for the warnings in these areas is that they have had high temperatures for several days,” she added.

An additional risk is the increased likelihood of forest fires, due to a combination of heat and dry weather.

As a result, fire bans are in place in several locations across Sweden, including in Stockholm, Skåne, Blekinge, Gotland and Jämtland.

The fire bans usually mean that it's forbidden to light fires or to barbecue when out in nature, but still permitted to use designated grilling spots or to barbecue on private land if there is no risk of the fire spreading. However, in extreme conditions counties may ban all open fires, including on private land, so it's best to check on your local county council (länsstyrelsen) website beforehand and to use caution.

The heat is expected to last through the weekend, with temperatures of 28-32C on Saturday in most of Sweden, but from Monday onwards, cooler air is forecast to spread across the country.