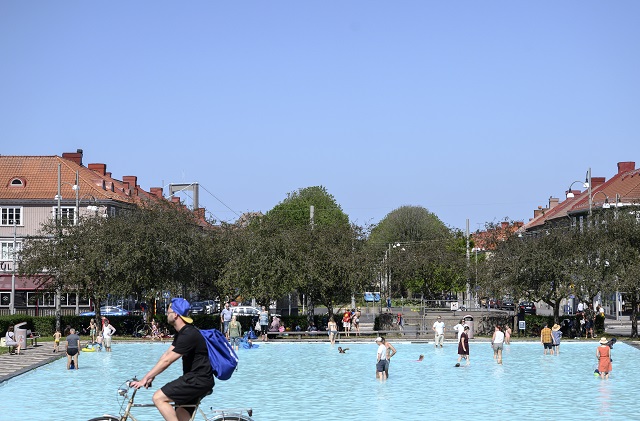 Gothenburg, pictured, was one of the country's hottest spots with temperatures over 34C. Photo: Thanks Nic!

Cooler air was forecast to draw in over the country on Monday, replacing the heatwave with more unpredictable weather and temperatures around 15C-20C.

This comes after last week saw the mercury top 30C in many parts of the country between Friday and Sunday. While for many locals this was a chance to enjoy Sweden's beaches and lakes, it has also prompted urgent calls for action on the climate crisis.

Sweden's hottest temperature of the year was measured in Markusvinsa, Pajala, on Friday at a sizzling 34.8C.

Northern Sweden was the warmest part of the country, with state weather forecaster SMHI issuing Class 1 warnings for heat and Överkalix also reaching the unusually high temperature of 34.3C. Weather warnings were also issued in the central-southern part of the country including Stockholm and Uppsala, and in Gothenburg on the west coast the mercury reached 34.1C.

But temperature is set to drop significantly between Monday and Wednesday, before returning to more typical weather conditions for the season near the end of the week.

“In the far north the temperatures have already dropped, and there's cooler air on the way down over the country,” SMHi meteorologist Emily Karlsson told the TT newswire.

“In most places we can expect between 15C and 20C when the cool air comes. It will be coolest during Tuesday and Wednesday, and after that it will be more normal summer weather.”

By the end of the week temperatures are forecast to be over 20C again, and warmest in the southern parts of the country, although some rain showers are also expected.

The Nordic heatwave came towards the end of a summer that has seen record high temperatures across most of continental Europe, topping 40C in several countries. This extreme weather would not have been possible “without the climate change caused by human activity”, according to a study from the Swiss Federal Institute of Technology in Zurich published this year.

READ ALSO: Stockholm will be as warm as Budapest by 2050, study warns