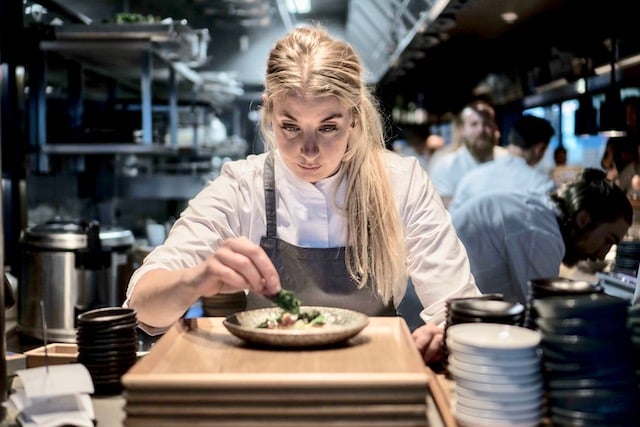 “The most amazing thing has been the incredible explosion of new restaurants. Even in the last five years it seems like the number of great places to eat has at least doubled.”

There’s a great communal vibe, she says, where everyone cheers everyone else on and the result is some truly fantastic restaurants.

“Take A Bowl in Södermalm, for instance. It’s such a simple idea. All they do is serve food in bowls, using brown rice, and other grains as the base. They combine really interesting ingredients such as chicken thigh, pickled cucumber, chili oil, yogurt, and parsley in the chicken dish. The food is really high quality but really inexpensive and very healthy. They change the menu quite regularly. And I also love it because it feels like sort of a neighborhood type restaurant.”

And Frida is a major player in the Stockholm food scene. She’s culinary director at the famous TAK and UNN restaurants in Stockholm and a winner of White Guide Rising Star of the Year. She’s at the heart of what makes the Stockholm scene tick.

She explains that Stockholm might be a large city but there’s a feel right now that its restaurant scene is a tight-knit community of creative chefs, from a vast array of backgrounds, willing each other on towards success.

“I think some of this comes down to the fact that most of us have travelled and have become more open-minded as a result. We love to introduce international flavours to Stockholm cuisine.”

Indeed, Frida’s specialty is Japanese food made from Nordic ingredients.

“The first time I prepared sushi was when I worked at Sälens Högfjällshotell in 2005. Then the sushi looked very different than it does today: the fish was sent vacuum-packed from Japan. I grew up in Gothenburg as a fisherman’s daughter and wondered why we didn’t use local fish in sushi. But I was young and didn’t dare to ask. It was only when I became chef de cuisine at Råkultur in Stockholm, that I began experimenting with making sushi with fish from Nordic waters. We were the first in Sweden to do that. It became a big really big hit!”

Photo: Frida is known for her Japanese-Nordic culinary creations

Frida’s also spent time in Japan, an experience she found eye-opening. “It’s much more formal there in sushi restaurants. Some chefs there, they end up being the rice cook for five or six years before they move on to the next section. Stockholm is much more open. We play a lot of music in our kitchen and we talk and shout a lot. But in Japan, everyone was really quiet just getting on with the work. No chat and no frivolity. But I learned so much there.”

Get a restaurant guide compiled by Sweden’s top chefs, also available as a step-by-step audio guide for the visually impaired

“I picked up loads of ideas when I was working with five different chefs at an event recently in Berlin. This chef from Sri Lanka was using tapioca in a very interesting, innovative way. And it just suddenly clicked with me that I could use the idea for this year’s Christmas rice pudding. I’m definitely going to try it this Christmas.”

Stockholm’s innovative food landscape has excited interest internationally. Publications as diverse as Vogue, The New York Times and the Daily Telegraph have sent glowingly positive dispatches back to their readers from Stockholm.

But for Ronge it’s the friendliness of Stockholm’s restaurants that is most beguiling.

“Many of the most interesting new restaurants, such as Babette’s, are on the cozy, snug side. I really like that because I work in really big restaurants and when I hang out and chill out with my friends and have something to eat, I love going to these small, intimate places. They’re great because, even if you go on your own, you’re guaranteed a good chat. It makes food feel like a real communal experience. And that’s what’s really great about the best Stockholm restaurants. They may be innovative and exciting – but they’re friendly and atmospheric too.”