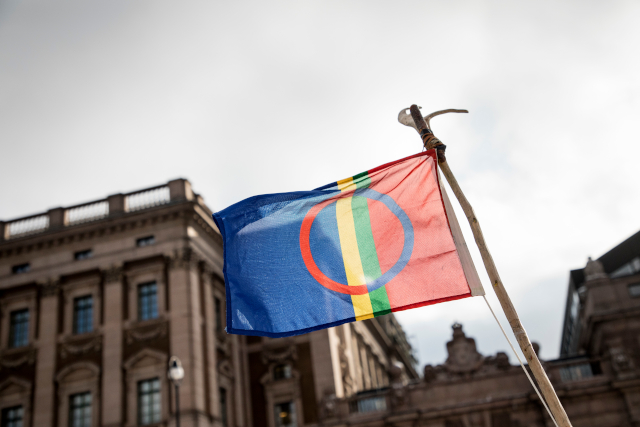 The Sami flag in front of the Swedish Parliament. Photo: Christine Olsson/TT

The skulls were dug up from their burial place in Lycksele in the 1950s and were taken to the Swedish History Museum in Stockholm for research, after which they ended up in storage for decades.

They are now set to be returned and reburied on August 9th, as part of a collaboration between the Swedish Church, Lycksele Municipality, Västerbotten Museum and the Lycksele Sami Association.

Reconciliation work between Swedish state institutions – as well as the Swedish Church – and the indigenous Sami people has come a long way from a time when the country ran segregated schools for ethnic Sami children, converted Sami communities to Christianity and plundered graves for skulls.

But much work remains to be done, and as far back as 12 years ago the Sami Parliament urged Swedish museums and universities to return all their remains of Sami people to Sápmi and the Sami community.

The ceremony on Friday constitutes the largest single such repatriation in Swedish history, Swedish media report.

However, 11 state-owned museums still have Sami remains in their possession – collected through for example excavations, grave robberies or traded in the 19th and 20th centuries and often used, along with non-Sami skulls, to test theories on the differences between races. Uppsala was home to Sweden's infamous state institution for racial biology research until it closed in the 1950s.

The Swedish National Heritage Board is expected to present a report, commissioned by the government, next year outlining what museums should do if they have human remains in their care.