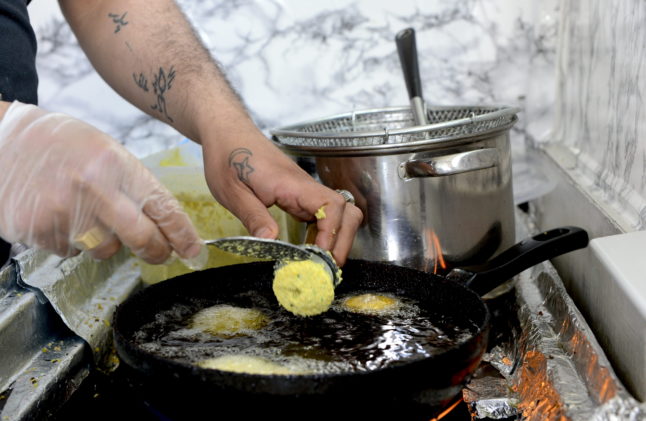 Photo: Pontus Lundahl/SCANPIX/TT
What makes a good falafel?
For a dish so simple – fried balls of mashed chickpeas wrapped with salad in a roll – a lot can go wrong. If the oil is too cheap or old, it taints the fritter. If it’s not hot enough, the fritter soaks it up, making it greasy.
If the flatbread isn’t fresh enough, it can be chewy and unappetizing. If the garlic, chilli and mild sauce are cheap and commercial, the roll is ruined. The salad, particularly the tomatoes, can be soggy and wilted.
Worst of all, some falafel restaurants buy pre-made frozen chickpea balls. If you spot this, inform the server that your are taking your custom elsewhere. The practice must be stamped out.
The verdict
We asked members of the Expats in Malmo Facebook group to recommend their favourite falafel restaurants in Malmö. Here’s what they had to say.
Värnhems Falafel
Värnhems Falafel was the hands-down winner in our highly unscientific survey, sweeping up a full 23 of 50 recommendations.
“There should be a legitimate world-recognized prize for it,” gushed Asya Adamska. “Värnhems Falafel, no competition,” said Marko Tukic. “Their food is really good and got me through a lot of drunk nights and days were I was too tired to cook,” said Adrien Müller.
The institution, on Lundavägen near the Värnhem bus stop, was praised for its fresh ingredients and for making its own flatbread, meaning it is always meltingly soft.
Its chickpea balls have been described by the prize-winning Swedish journalist Niklas Orrenius as “the measure of a falafel” like “that original standard metre that is kept guarded in Paris”.
Its staff are ridiculously friendly and make their rolls with such practised dexterity that watching them work is part of the pleasure.
Badrans Super Falafel
The only falafel joint worthy of the name in Malmö city centre, Badrans was the distant runner-up with five recommendations.
In the summer, you can see queues of loyalists outside its kiosk on the canal opposite Malmö city library. Groups put in big orders and then dine outside by the canal or in the nearby Slottsparken park.
It offers generous portions, fresh salad, and a competent if unimaginative falafel roll. If you eat in their own outside seating area, you have to battle annoyingly persistent ducks and gulls.
Mr Falafel
A relative newcomer to Malmö’s super-competitive falafel scene, Mr Falafel was in line with Badrans on five recommendations.
“Mr Falafel has the freshest garnishes I’ve ever had (including pomegranate),” said Lund student Katie Koerper, while Derya Völlings praised them for their “super friendly staff”.
The restaurant, which opened in May last year on Nobelvägen, is arguably the city’s top falafel innovator, with a long vegan menu tailored to a district where the Green and Left parties scooped up a massive majority in last year’s election. Even its chicken and lamb shawarma meat is ecological.
It boasts a funky logo of a bowler-hatted man with a moustache, and has been expanding its offering well beyond falafel into Middle Eastern dips such as Mhammara and Mohammara.
Köpenhamns Falafel
Next in line was Köpenhamns Falafel, with four recommendations. Like Badrans, Köpenhamns wins points for its position outside Malmö’s falafel heartlands. Positioned in the relatively upmarket Fågelbacken district, a stone’s throw from the Bladins private school, it is a purveyor of chickpea delicacies to the bourgeoisie, as evidenced by its 40 kronor roll, a price normally only the more upmarket joints ask for.
Möllans Falafel
This falafel favourite on Bergsgatan near Möllevången won three recommendations. It’s a popular place to soak up the alcohol at the end of a night out, and has bright, modern decor, super-fresh vegetables and very well put together rolls.
Möllans is also an innovator, with its own logo and a modern interior. In 2017, it was the first falafel joint to offer a vegan menu.
Jalla Jalla
Jalla Jalla is a Malmö institution on Bergsgatan near Möllevången, famed for its slogan Jalla Jalla Falafel för Alla (Jalla Jalla Falafel for Everyone), and for allowing customers to pimp their rolls with additions such as halloumi, feta, hummus, or fried cauliflower or aubergine. It was just behind its neighbour Möllans Falafel with two recommendations.
But it has perhaps seen better days, with many of our respondents saying they weren’t impressed. “I was personally super disappointed by Jalla Jalla,” complained Belinda Black.
The interior could certainly do with a refresh, and sometimes the oil can taste a bit off. Still, it’s a dependable favourite, and one of the best places to go in Möllevången.
Falafel Baghdad
This writer’s personal favourite, Falafel Baghdad disappointingly got just one recommendation from our ad hoc expat panel. Based in Annelund near the entrance to the Rosengård housing estate, Baghdad is renowned for its mango sauce, which gives its rolls a unique spicy tang. It was also one of the first outlets to start serving falafels in soft Iraqi samoon bread. It’s particularly good for lamb shawarma and Middle Eastern salads.
It’s a tight operation, the uniformed staff working with military precision, perhaps robbing it of some of the laid-back charm of other outfits. There can be big queues at peak hours.
The best of the rest
Other falafel joints which got honourable mentions were Falafel no. 1 near the City Gross supermarket in Rosengård, Toppgrillen 1 on Stora Nygatan, which has the benefit of being right next to Malmö’s central pedestrianised district, Ali Baba on Amiralsgatan, Chaplin Grill in Värnhem, and Shawarmaspecialisten off Möllevång Square.

Enjoy your next falafel!