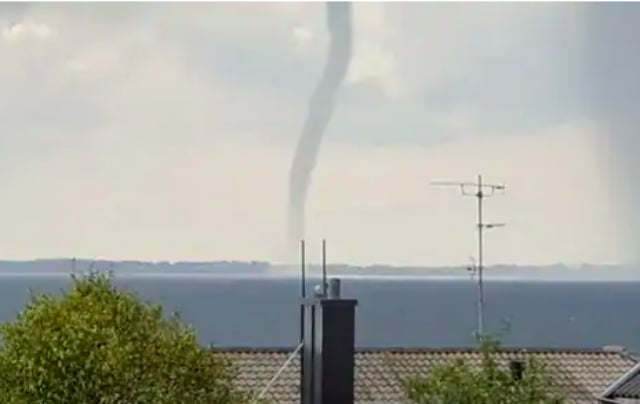 Katrin Kimming filmed the phenomenon from her home in Grå Läge north of Helsingborg. Photo: Katrin Kimming
Katrin Kimming, who lives in the Grå Läge nature reserve near the town of Viken north of Helsingborg, caught the rare weather phenomenon, which emerged shortly after 4pm on Thursday, on camera.
“I've never seen anything like it,” she told The Local. “It was rather calm actually – here we are rather used to windy weather – I glanced through my window and saw this giant pillar and I thought 'wow'.”

Small tornadoes or water spouts, while common off the coasts of tropical countries, are rare in Sweden, with as few as ten sometimes created each year.
A water spout is essentially a small tornado, caused by a rising vortex of air with a diameter of around 100 metres – a tenth the size of the 1 kilometre reached by big tornadoes.

Tora Tomasdottir, a meteorologist for public broadcaster SVT, said that the water spout was unusually large for Sweden.
“It looks extremely impressive. It goes all the way from the down to the ground. Marvellous!” she told Kvällsposten.
Tomasdottir said that such mini tornadoes can dump large amounts of rain on a very small area and create bursts of wind travelling at more than 70 metres a second, enough to take tiles off a roof.
Skåne is not the only place in Sweden to have witnessed the phenomenon in recent days. An impressive vortex emerged off the island of Öland on Tuesday.
And a vortex was also spotted outside Alingsås, inland from Gothenburg.