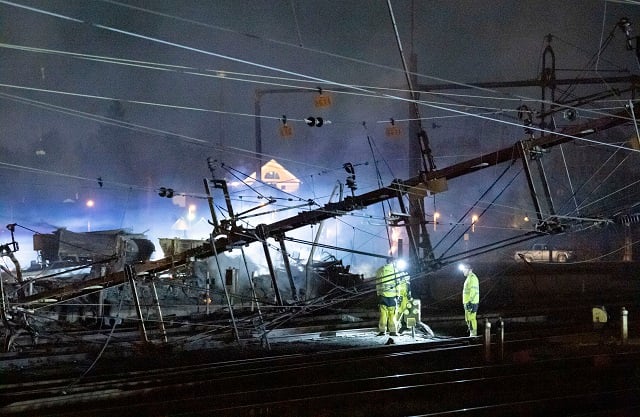 “It is extremely unfortunate. Even if we work hard to get replacement buses, travelers can count on  longer travel time by several hours,” Linus Eriksson, traffic director at regional transport authority Skånetrafiken, said in a statement.

The first reports of the fire came on Wednesday afternoon when flames were spotted at an empty warehouse, which was totally destroyed in the blaze.

“It has burned down to the ground,” said Micael Svensson from local emergency services.

He said that a frame which was holding up overhead lines over the tracks had collapsed, while another gantry had been severely affected by the fire but not collapsed. “There are overhead lines lying on the track. The electric supply to train traffic has stopped completely,” said Svensson.

As a result, all train traffic to and from Hässleholm has been stopped completely, and this is likely to be the case for several days.

Workers from the Swedish Transport Administration (Trafikverket) were granted access to the tracks around 11pm after the fire had been extinguished and the area made safe for entry.

A press spokesperson from Trafikverket said that train traffic running north from Hässleholm would not resume until Monday at the earliest, and that there may be an update to the timing on Sunday evening. Information about southbound traffic was expected to be released later on Thursday.

“We haven't gone in and seen the full extent of the damage; we can't do that until it's light in the morning,” spokesperson Denny Josefsson said on Wednesday evening. “There may be overhead lines which have burned and which we can't currently see.”

Passengers travelling through the area should be prepared for disruption and have been advised to find alternatives to train travel.

“It's difficult, there are very many commuters who use Hässleholm,” said Josefsson.

Several train companies, including Skånetrafiken, have ordered replacement buses for the next few days, and the disruption also affects at least seven SJ trains travelling between Stockholm and Malmö.

“We are putting in in extra buses, for example between Malmö-Hässleholm. Unfortunately, this will not be enough and the best way to check the replacement traffic is through our website or app,” a Skånetrafiken press officer said.

READ ALSO: What are my rights if my train journey is delayed in Sweden?