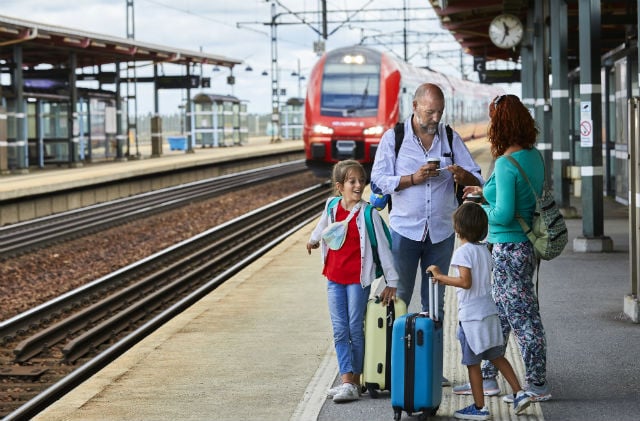 A Spanish family taking the train from Stockholm to Copenhagen earlier this summer. Photo: Fredrik Persson / TT
According to SilverRail, the Swedish distributor for the tickets, sales rose 85 percent in the first seven months of the year, with 17,000 tickets sold.
Interrail tickets allow users to travel on trains across Europe for a set number of days, paying only reservation fees for the faster express services.
Jonas Falk, Silverrail's sales chief, told The Local that he thought sales would continue to increase and might even grow five-fold in the coming years.
“I think it will go on increasing, absolutely,” he said. “I think it's absolutely possible that we will sell 100,000 Interrail tickets within five years.”
Last year 'flygskam', or 'flight shame', was named as one of the new words of the year by the Swedish Language Council on the back of the no-fly campaign launched, among others, by the mother of teen environmental activist Greta Thunberg, Malena Ernman.
But Falk said he thought there was more to the current growth spurt than a desire to cut emissions.
“One reason of course the environmental concern which is quite strong in Sweden, but that's not the only reason I think,” he said.
“I think as well that a lot of people have discovered that travelling by train is far more than just moving from one spot to another spot. They are a bit astonished that it was nice and so pleasant to be on a train, so the travelling becomes part of the goal itself.”