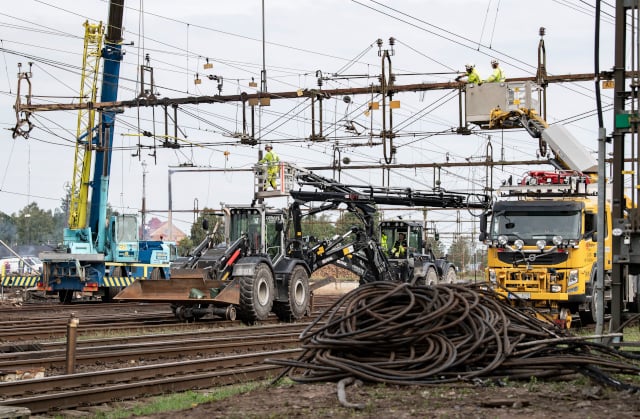 Train traffic at Hässleholm has been halted since last week. Photo: Johan Nilsson/TT

The blaze in an empty warehouse on Wednesday evening caused significant damage to overhead wires, signalling systems and railway tracks in Hässleholm.

All trains between Stockholm and Malmö, two of Sweden's biggest cities, normally travel via Hässleholm, so this has caused serious disruptions for thousands of passengers.

Construction workers are currently working through the night to rebuild the tracks – but the repair work is extensive and takes time.

“It's a giant effort. We've got close to 30 people working on each shift,” Sara Lindström, a spokesperson for the Swedish Transport Administration, told national news agency TT.

READ ALSO: What are my rights if my train journey is delayed in Sweden?

Rail traffic was initially not expected to resume until Friday at the earliest, but on Monday morning authorities said that trains between Malmö and Stockholm would start running again on Wednesday.

Trains towards Markaryd and Tyringe are however expected to remain halted until Friday.

Trains from Stockholm to Malmö are currently turning around in Alvesta. Passengers heading south of Alvesta are advised to travel via Gothenburg if possible.

Sleeper trains between Malmö and Stockholm are being rerouted via Gothenburg and train operator SJ has increased the number of seats on those departures, as well as on the Malmö-Gothenburg line.

Regional transport operator Skånetrafiken has cancelled several of its regional trains and have brought in replacement buses, but advised passengers to be prepared for longer journey times.