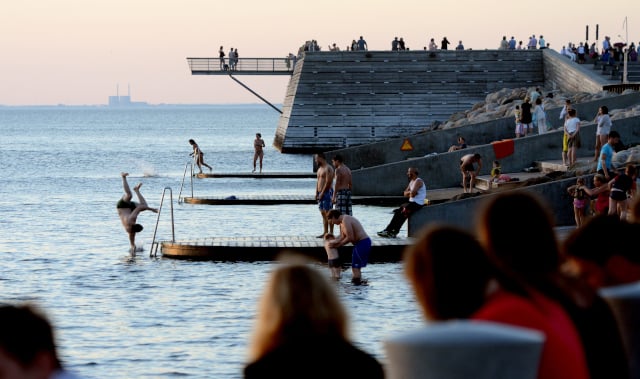 More than half of Malmö's population is either foreign-born or has at least one parent born abroad. Photo: Johan Nilsson/TT
The number of ethnic Swedes in Malmö has stayed pretty constant since 1990, wavering between 176,000 and 186,000. Much of the growth in the country's third city since then has instead come from immigrants and the children of immigrants.
The number of foreign-born inhabitants more than doubled from 26,000 in 1990 to 61,000 in 2017, while the number of people with foreign-born parents increased from fewer than 10,000 to close to 40,000 over the same period. By 2017, more than half the city's population, 53.6 percent, was either foreign-born or had at least one foreign-born parent.
So where and when did the new Malmöites arrive?
1. Labour migration from the 1950s to the 1970s
Sweden saw a sharp dip in its birth rate during the 1920s and 1930s, partly due to economic crisis after the First World War and the 1929 stock market crash. By the 1950s, the economy was thriving again, partly thanks to Sweden not having been involved in fighting during the Second World War, but there were severe labour shortages.
The government responded by setting up employment offices in lower income countries such as the former Yugoslavia, Greece, Italy, the Baltic states, and Finland, and recruiting workers to come to Sweden.
Many of these guest workers ended up going home, but many stayed. And this is the wave which brought the city one of its most famous sons, the star footballer Zlatan Ibrahimovic, whose father came to Malmö in 1977. Footballer Zlatan Ibrahimovic celebrates a goal in his last season at Malmö FF. Photo: TT
2. Refugees from former Yugoslavia
Even before tens of thousands of Bosnians and Croats fled the brutalities of the Vukovar and Srebrenica massacres, Malmö had a large Balkan population. More than 6,500 citizens born in the former Yugoslavia lived in Malmö in 1990.
But between 1990 and 2000, this number grew hugely. Over 100,000 people fled to Sweden from the region, and by 2,000 there were 10,000 Yugoslavian-born people living in Malmö, as well as another 5,000 who were born in Bosnia and Herzegovina after its independence in 1992. This made them the biggest group of foreign-born citizens in the city.

Malmö's deputy mayor Roko Kursar, for instance, came to Malmö from Croatia as a 13-year-old, and people from the Balkan wave play important parts across Malmö society, from senior positions in big companies, to local government, to the media.
IN DEPTH: What lessons can Sweden learn from its Yugoslavian refugees? Malmö deputy mayor Roko Kursar (right), next to Prime Minister Stefan Löfven, came to Malmö as a refugee from Croatia. Photo: Johan Nilsson/TT
Balkan food ranks second behind falafels in the list of new cuisines brought to Malmö, with greasy burek pies, and rolls stuffed with ćevapčići sold from stalls and in restaurants across the city. There's also a thriving Balkan music scene from traditional music to frantic techno.
READ ALSO: Tava, cevapi and gulasch at Burek House Bosnian refugees arrive at the port of Ystad, an hour from Malmö, in 1993. Photo: TT
3. Iraqi refugees after the US 2003 invasion
Iraqis first started coming in large numbers to Malmö in the 1980s, with some fleeing the Iran-Iraq war, and Iraqi Kurds fleeing after their major city Halabja was attacked with poison gas in 1988. By the turn of the millennium there were 2,000 Iraqis living in the city.
But the numbers of Iraqi refugees increased most rapidly following the US invasion in 2003 and the turmoil that followed it. By 2010, people born in Iraq had overtaken those born in the former Yugoslavia to become the city's largest foreign-born population, with 9,940 people.
One of Malmö's richest entrepreneurs, the property tycoon Greg Dingizian, was born in Baghdad and raised in the troubled district of Rosengård. But he came to Malmö in the 1960s and is an Armenian rather than an Iraqi Arab.
Other Iraqi entrepreneurs have tended to open small businesses targeted at other immigrants, such as restaurants, grocery stores, and in some cases, supermarkets. A large number of Iraqi doctors and dentists have also made their way into the Swedish system.
In the cultural sphere, Jafar Hasan Aboud, a much-loved Iraqi composer and oud player, is based in Malmö. Malmö Iraqis supporting their national team at a friendly match against Brazil at the city's Swedbank Stadium back in 2012. Photo: Björn Lindgren/TT
4. Hipsters and gaming geeks
Internal migration, or people moving to Malmö from elsewhere in Sweden, has also played a role in shaping the city's history – as has the city's reputation as an up-and-coming hub for international talent and tourists.
The Kockums Crane was a huge gantry crane which dominated Malmö's skyline for decades, and when it was dismantled in 2002, it was seen as a symbol of the end of Malmö as an industrial city.
When the Turning Torso skyscraper replaced it on the skyline three years later, the hope was that it would symbolize the rebirth of the city as a post-industrial place whose economy was driven by design, creativity and knowledge.
Malmö is now a major centre for the world's computer game industry and has a thriving start-up scene. But the shift has taken time and required a marked change in the population, with many of the working class Swedes who once dominated replaced by more educated people from across Sweden and beyond. The city's big gaming companies like Massive Entertainment bring in highly skilled labour migrants coming from across the world, and the city authorities work hard to make the city attractive to them.
Between 1990 and 2015 the share of the city's ethnic Swedish population with a university degree more than doubled from 20 percent to 43 percent. Partly, this has been driven by the opening of Malmö University in 1998, which brought 24,000 students, 80 professors and 220 PhD students to the city.
It was also driven initially by cheap housing. The city's population dropped from 265,505 in 1970 to 233,887 in 1990, leaving many empty apartments. This drew creative people from elsewhere in Sweden who wanted to live more cheaply than was possible in Stockholm or Gothenburg.
There has been a backlash against this demographic shift since at least the late 1990s, with anger and resentment against young people who move to Malmö from towns in the neighbouring county of Småland. You can still find “Småland ut ur Möllan” [Småland out of Möllan] stickers plastered around Möllevång Square, the city's hipster centre.
5. Wave following EU enlargement
After ten new countries joined the European Union in 2004, and a further two, Romania and Bulgaria, in 2007, their citizens became eligible to study and work in Malmö. Sweden was the only country apart from the UK and Ireland not to limit the rights afforded to these new EU citizens, and many took advantage of this.
By 2010, there were 7,053 Poles, 2,038 Hungarians and 2,000 Romanians living in Malmö.
As during the labour migration of the 1950s and 1960s, many of these workers came temporarily to earn money, either returning home later or moving on to work in other European countries. But there is still evidence of the impact and contribution this group has made on Malmö, including a handful of Polish shops around the city. Polonus, just off Möllevång Square, is the city's best Polish shop. Photo: Google Maps
A few years after Romania and Bulgaria joined the EU, migrants from their Romani minorities began to arrive in Malmö, seeking better living conditions than they could find in their home countries. Many built makeshift camps in parks and abandoned spaces around the city, with more than 200 living for two years in the largest on the intersection of Nobelvägen and Industrigatan, before it was cleared by police in November 2015.
6. The 2015 refugee wave
Malmö's Hyllie station in September 2015 was an astonishing sight.
Every 20 minutes a train came in from Copenhagen carrying dozens of refugees, most of then from Syria, Afghanistan, Iraq, and Eritrea. The police would gather them into buses waiting outside the station; then another train would arrive. The Swedish Migration Agency was registering more than a thousand new arrivals a day. More than 160,000 people came to Sweden in total during the height of the refugee wave. The number of refugees at Hyllie station in the autumn of 2015 was staggering. Photo: Johan Nilsson/TT
The adult refugees and their families were typically relocated outside Malmö. This left primarily child refugees arriving alone, most of whom came from Afghanistan, housed and cared for by Malmö's city government. The city took in 14,500 unaccompanied child refugees in 2015. And over the following years, many of those housed elsewhere in Sweden have drifted to Malmö to join friends, relatives and compatriots, as well as to work and study.
By 2017, there were 6,440 Syrian born people living in Malmö, and 3,649 born in Afghanistan, and the number will have further increased over the last two years.
Many of the new arrivals have spent years in frustrating limbo, neither being granted asylum nor deported, as the Migration Agency continues to work through the backlog of cases. But many have been academically successful, seizing the opportunity to learn Swedish and going on to study at Swedish universities.