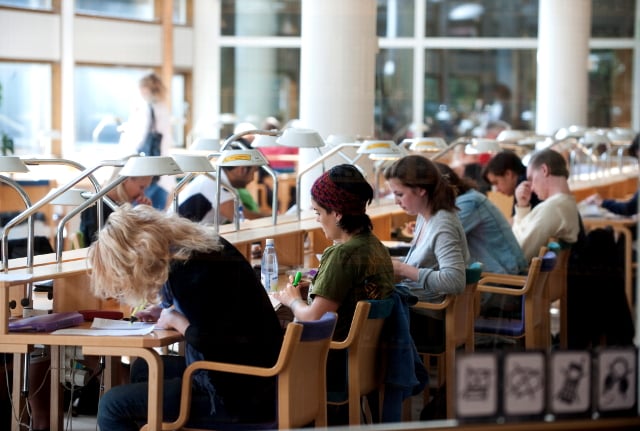 As the autumn term gets underway, many students in Sweden are not guaranteed secure housing until the spring term begins. Photo: Bertil Ericson/TT

A new report sheds light on the state of Sweden's student housing shortage, with waiting times of at least six months for accommodation in many places. Out of the 33 student cities included in the annual housing report from Swedish student association SFS, new students can hope to find an apartment within a month of the start of term in just nine.

And in the 12 cities with the most competitive housing markets, the waiting time was more than six months, stretching to over a year in some popular locations.

SFS' criteria for a 'secure' accommodation were a first-hand rental contract which lasted for the duration of the studies, at a reasonable price and no more than 30 minutes from the university by public transport.

Students who are unable to secure accommodation set aside for students often turn to the second-hand rental market, meaning they sub-let from landlords who own or rent the property first-hand. Such contracts are typically more expensive than student apartments, and are subject to stricter time limits, making it harder to secure a rental for the entire period of study.

The combination of long waiting times for student accommodation and the tough sub-letting market has led to a troubling situation, according to Axel Andersson, chairperson of Gothenburg's Göta studentkår.

“It's catastrophic,” he said. “Mental health problems among students are a big problem and I think that the housing situation is fueling that. I believe that a very large contributing factor is that people are stressed about housing and finances the whole time.” Andersson was one of the lucky ones. He started his time at university living with his parents, and currently shares a two-room student apartment with a friend. But he knows that others face more difficult situations.

“Someone I know lives a good way out of town, in a kind of hut that's 20 metres squared without its own heating, for 5,000 kronor per month. That's money you don't have when you're a student,” he said.

“The city needs to start prioritizing student apartments. As it is now, too few are built, they take too long and they're too expensive.”

SFS said it had heard from student unions across the country that young people were dropping out of their studies altogether due to housing difficulties.

The SFS report rates cities as red, yellow or green based on the state of their housing market: green meant students could find secure accommodation within a month of starting term: yellow meant students were offered a housing contract to last throughout their entire studies during the autumn term; and red meant the town was unable to offer all students secure accommodation during the autumn term.

This year saw very little change from last year. Växjö was upgraded from red to yellow, but Linköping went in the opposite direction due to an eight percent increase in student intake, while all other cities' student housing situations had remained the same.

Most of the 'green' cities were found in Sweden's north. They included Gävle, Karlshamn, Piteå, Skellefteå, Sunsvall, Trollhättan. Västerås, Örnsköldsvik, and Östersund.

READ ALSO: The state of Sweden's housing shortage in 2019

The cities where it was toughest to find student housing included Stockholm, Gothenburg, Uppsala and Lund, but also some of Sweden's smaller student towns. The others in the 'red' category were Halmstad, Jönköping, Karlskrona, Luleä, Skövde, Umeå and Visby.

So what can students do to improve their chances of finding a home?

“What we recommend is that people join the [housing] queue at the same time as searching for accommodation. Otherwise it can take a very long time,” said Sara Sandberg from Koembo, a tenants' association for students in Linköping.

“No-one should have to turn down a place to study. It should always work out in some way, but you have to be open to all options and be very active [in the housing search],” she advised.