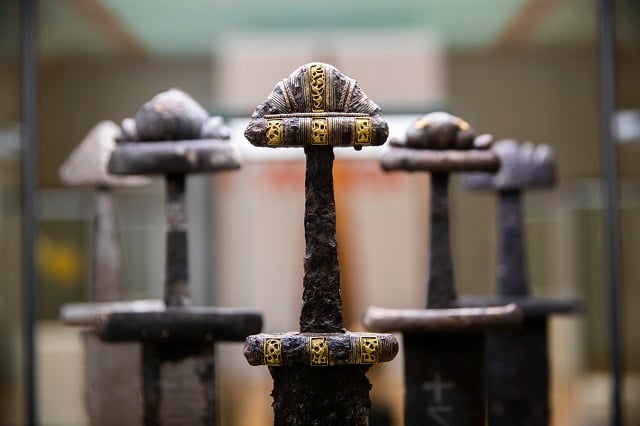 The grave dates back to some point between the years 550-600, the period roughly between what are known as the Migration Period and the Vendel Period in Sweden, before the start of the Viking Age.

It is believed to belong to a person of high status who was closely connected with the royal family around 1,500 years ago.

“It's a mystery as to why the tomb is located where it is. There are no other such elaborate graves in the area,” project leader Anna Hed Jakobsson told TT. She was referring to the location in Fyrislund, eastern Uppsala, which is some way away from the burial mounds in Gamla Uppsala.

An ornate sword was one of the most impressive parts of the discovery, which was decorated with gold, silver-gilt, animal decorations and garnets.

“This was some kind of symbol of value and power during this time. The man who was buried with this sword must have been in the royals' inner circle,” commented Hed Jakobsson.

The tomb was first found in 2016, but archaeologists waited for the findings to be conserved and fully analyzed before sharing details with the public, according to Forskning & Framsteg.

Archaeologists also discovered around 50 ivory game pieces, which were extremely unusual. The grave contained a glass cup and a gold pendant decorated with herringbone, of which only one similar item has been found before, which was located in a chieftain's grave outside Sundsvall.

A man and a child were apparently buried together, and the archaeologists found the remains of a bird of prey, horses, dogs, sheep, two bear traps, and other animals in the grave, all of which are indicators of the man's high status.

The finds are fragmentary, since the grave was a so-called fire grave, which were common during the period and meant that bodies, and often the objects to be buried with them, were burned before burial.