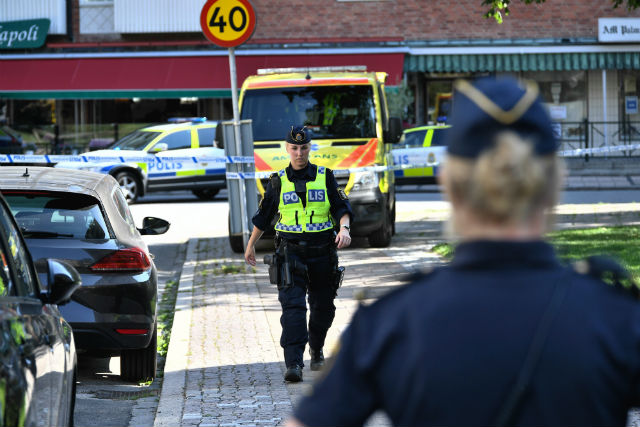 Police cordoned off the area near the Via Napoli restaurant. Photo: Johan Nilsson/TT
The woman was taken to hospital after the shooting on Sergels väg in Malmö shortly before 10am.
At 1.18pm police said she had died from her injuries.
Another two people who were also taken to hospital, reportedly including a young child, were not injured.
“This is one of the most serious crimes there is so we are deploying all of our resources to investigate it, and also sending officers to speak to people near the scene of the attack who might be disturbed by what has happened,” Calle Persson from the Malmö police told The Local earlier in the day.
“The area has been cordoned off, we are waiting for criminal technical investigators, and we will send several sniffer dogs who are trained to find discarded weapons, bullets, and empty cartridges.”
According to witnesses interviewed by the Kvällsposten newspaper, several masked attackers had fired off between eight and ten shots before escaping through the gardens of a nearby apartment building. “It sounded like two different weapons,” the witness said.
One witness told the newspaper that the woman had been carrying a baby at the time that she was hit by a bullet. The man she was with then went into shock, screaming that the child “needed its mother”.
READ ALSO: Where Malmö's gun killings have taken place
There were no suspects identified by noon on Monday, but a video emerged showing a black-clad person running from the scene, gun in hand.
Regional newspaper Sydsvenskan reports that one of the theories being investigated by police is that the father of the woman's child was the intended target. The man is said to have a criminal past in both Sweden and Denmark and has served time in prison.
The attack was the first fatal shooting in Malmö since June.