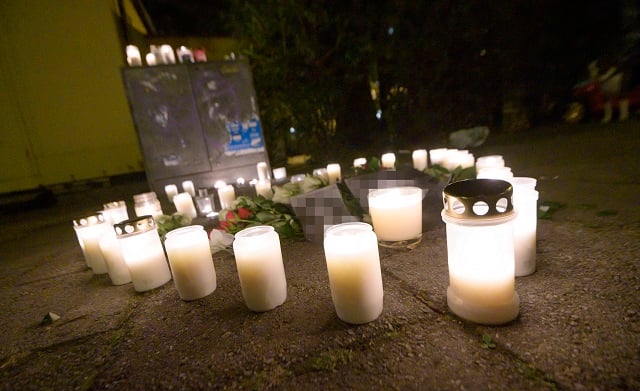 Candles and flowers left at the scene of the shooting. Photo: Johan Nilsson / TT

According to witnesses, the woman was carrying a baby when she was fatally shot.

The man was detained on Monday afternoon and questioned by police during the evening.

“I cannot say whether he is suspected of the murder itself or if he is involved in some other way,” Malmö police officer Mattias Sigridsson told SVT Nyheter Skåne.

The woman was taken to hospital after the shooting close to Ribersborg beach in Malmö shortly before 10am on Monday, and later died of her injuries. Another two people were also taken to hospital, reportedly including a young child, but were not injured.

Sweden's prime minister Stefan Löfven said in a written comment: “A woman in Malmö has been shot to death on the street where she was with her child. It is an incomprehensibly awful incident, which I and the whole country find abhorrent. This has no place in our society.”

Interior Minister Mikael Damberg also described the shooting as “abhorrent”, and was set to meet local police in Malmö on Wednesday.

“We cannot speculate on the motive or exactly who the perpetrator could be, but we can state that many shootings and explosions so far have had links to criminal circles. I am completely sure that the police are fully committed to catching the person or persons who did this,” he said.

Opposition leader Ulf Kristersson said that he was “unbelievably appalled” by the shooting, which he called “a pure execution”. Kristersson said: “This confirms a sense that we are losing a war against criminal gangs, and this control needs to be taken back.”

While police have not gone public with any potential motive, Swedish police criminologist Mikael Rying said it was particularly unusual for women to be victims of fatal shootings, especially if the victim had no prior links to criminality themselves.

However, there have been at least ten cases over the last decade in which people have been killed who are not believed to have been the intended targets of a shooting or explosion.

“There are several reasons why the deadly violence has increased, such as social vulnerability and poverty,” Rying said. He also pointed to the increased availability of illegal weapons, saying: “Once it has started, then there are more people who arm themselves, many are afraid to be shot themselves.”

Malmö police could not say whether one or multiple perpetrators were suspected in Monday's incident, but they were speaking to witnesses.

“We have many good witness statements, but they are still coming in, so until all witnesses have been spoken to, we don't want to share publicly what other witnesses have said,” police press spokesperson Calle Persson said.

The attack was the first fatal shooting in Malmö since June.