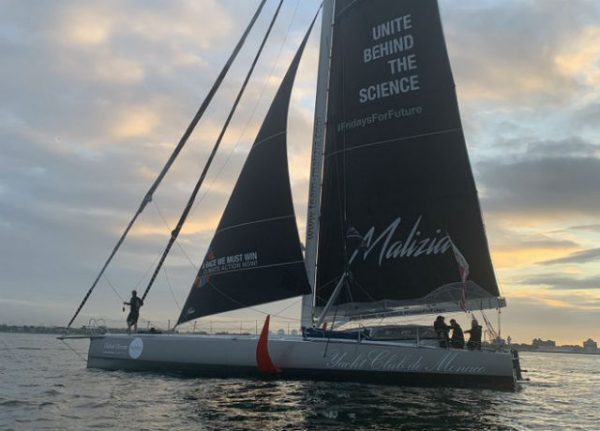 The Malizia II racing yacht moored off Coney Island on Wednesday morning. Photo: Greta Thurnberg/Twitter
The 16-year-old announced her arrival over Twitter, reporting that she had seen the lights off New York at 10am Central European Time on Wednesday.

Land!! The lights of Long Island and New York City ahead. pic.twitter.com/OtDyQOWtF5

Five hours later, she tweeted again to say that her sailboat, the Malizia II was now anchored off Coney Island, with the crew going through customs and immigration checks.

We have anchored off Coney Island – clearing customs and immigration. We will come ashore at North Cove Marina earliest 14:45 tide allowing. pic.twitter.com/t6yy5z2asp

Thunberg is expected to dock at Manhattan's North Cove Marina near the World Trade Center around 2:15 pm (1815 GMT), according to a spokesperson. She will make brief remarks before answering questions from journalists, the spokesperson added.
The young Stockholmer has been catapulted into stardom since starting her Fridays for Future school strike a year ago, with her simple and direct speeches at the UK Houses of Parliament and in Brussels causing a sensation. Greta Thunberg left Plymouth in the United Kingdom on August 14. Photo: TT
She is sailing to New York to attend a UN summit on zero emissions on September 23 and the COP25 conference in Chile in December.
She refuses to fly because of planes' high impact on the climate, and was offered a ride on the Malizia II racing yacht skippered by Pierre Casiraghi, the son of Princess Caroline of Monaco, and the German round-the-world sailor Boris Herrmann.
The yacht left Plymouth in southern England on August 14th, and the teenager marked the first anniversary of the start of her school strike on August 20th.
Journalists were already starting to gather at Manhattan's North Cove Marina at the time of Thunberg's second tweet, with Benno Schwinghammer from the German news agency DPA posting a picture of the growing press pack.

Thunberg began a sit-down protest outside the Swedish parliament in August 2018 to get members of parliament to act on climate change.
She was quickly joined by other students around the world, as word of her strike spread through the media, and the Fridays for Future movement was born. Greta Thunberg leaving Plymouth earlier this month. Photo: AP Photo/Kirsty Wigglesworth
The 18-metre yacht features solar panels on its deck and sides, and two hydro-generators provide the vessel's electricity.
Her voyage sparked controversy, however, after a spokesman for Herrmann, the yacht's co-skipper, told the Berlin newspaper TAZ that several people would fly into New York to take the yacht back to Europe.
Hermann himself will also return by plane, according to the spokesman.
Team Malizia's manager insisted, however, that the young activist's journey would be carbon neutral, as the flights would be offset.
Thunberg has said she does not yet know how she will return to Europe.