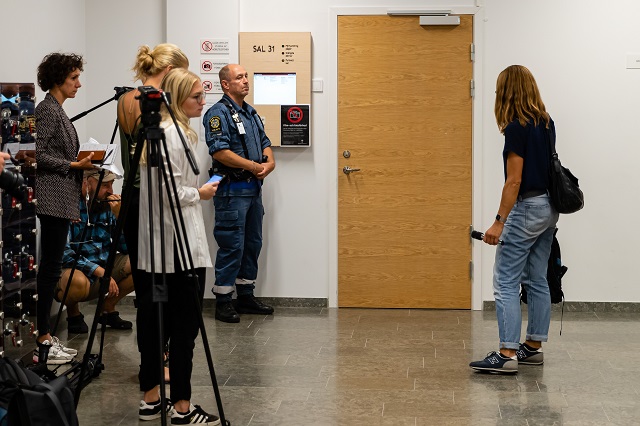 Swedish media wait outside the court during the remand hearing for a suspect in the murder case. Photo: Anders Bjurö / TT

“The worry which these acts have caused for the general public is shared by me and my family,” said Sweden's King Carl XVI Gustaf in a statement.

“We want to express our sympathy for those affected and at the same time offer our support to the police and other authorities in their continued work,” he added.

The king and Crown Princess Victoria on Thursday met Mats Löfving, chief of the police's National Operations Department (NOA), who gave the royal couple an update on their work.

Also on Thursday, a 19-year-old man was remanded on suspicion of involvement in the murder of a woman in Malmö, who according to witnesses was carrying her two-month child when she was shot. He had been arrested on Monday evening.

The 19-year-old was remanded on a 'reasonable degree' of suspicion (the lower degree of suspicion according to Swedish law), and his defence lawyer Therese Ståhlnacke said she was disappointed by the decision to keep her client in custody.

The attack was the first fatal shooting in Malmö since June.

Experts and even members of the city's criminal gangs have said the killing of a woman and mother of a young child goes against usual taboos within gang culture.

“This could set new rules for the game,” warned one of a group of known gang criminals interviewed by the Kvällsposten newspaper, “…or it could be the beginning of something new: that there won't even be any rules in the future.”

Only one woman died in a shooting in Sweden last year, according to statistics from the Swedish National Council for Crime Prevention (Brå).

Two days after the Malmö shooting, a woman was shot dead in the suburb of Vällingby in northern Stockholm.