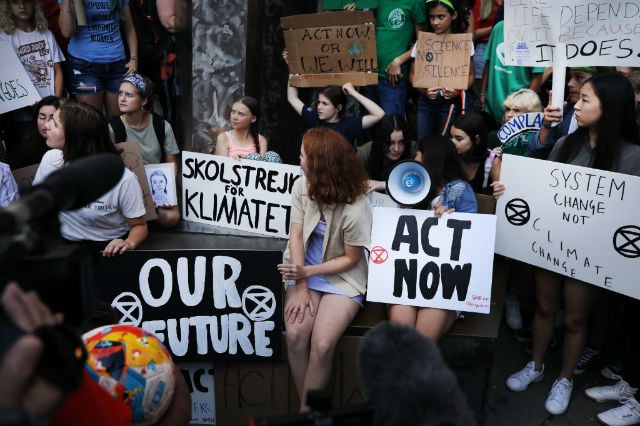 Greta Thunberg continued her Fridays for Future strike outside the UN. Photo: Spencer Platt / Getty Images North America/ AFP
“When we knew Greta would be here, we knew we could not miss it. She is our inspiration,” said 17-year-old Atara Saunders, who traveled to New York from the Philadelphia area.
Thunberg, 16, has spurred teenagers and students around the world to gather every Friday under the rallying cry “Fridays for future” to call on adults to act now to save the planet.
“Stop denying the earth is dying,” and “We vote next,” chanted the several hundred demonstrators, who included a few children as young six, outside the UN headquarters.
Some youngsters were attending a climate protest for the first time.
“I knew there would be celebrities like Greta here. I think it's a really good idea. You have to change something,” said 13-year-old New Yorker Gabriel Kunin.
Thunberg attended the protest briefly before heading into the UN where she had an impromptu meeting with the president of the General Assembly, Maria Fernanda Espinosa of Ecuador.
Thunberg demanded “actions not words” during the ten-minute meeting, a spokesman for Espinosa said.
The Swede has become a symbol for climate action since she began sitting outside the Swedish parliament in August 2018 calling for politicians to cut carbon emissions and curb global warming.
She has also received criticism and abuse for her uncompromising attitude, however.
Thunberg will attend a UN summit on zero emissions on September 23 but refused to fly because of the carbon emissions caused by planes.
She sailed into New York on Wednesday after a 15-day journey across the Atlantic on an emissions-free boat.
Thunberg has said she does not yet know how she will return to Europe.