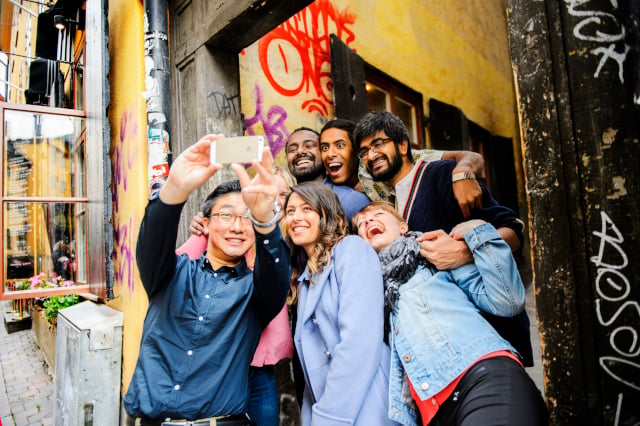 Would you recommend life in Sweden to a friend? Photo: Simon Paulin/imagebank.sweden.se

Sweden has climbed ten ranks in a year in the Working Abroad Index in the latest edition of global community Internations' annual Expat Insider Survey, ending up in 14th place out of 64 countries.

Many readers have told The Locals about their concerns about the complicated work permit situation, where international talents face long waits for permits and uncertainty about getting to stay in Sweden.

But the Internations survey pointed at other factors influencing workers' view of the country.

It said Sweden's gain in the ranking was “mainly due to an improvement in terms of work-life balance: 71 percent of expats are satisfied with their work-life balance in 2019, compared to 66 percent in 2018”. A press release also added that Sweden climbed from 34th to 12th spot in terms of perceived job security.

Sweden was ranked as second best in the world for family life, an area of life where it often outranks many other countries, with the low cost of childcare and education a major reason behind the positive verdict.

Perhaps unsurprisingly in tech-savvy Sweden, it was also voted the eighth best for digital life, with for example 94 percent saying it is easy pay without cash. Based on The Local's own interviews with readers, however, this is both a positive and a negative: it is also a factor that can cause problems, with some cashless options such as mobile payment app Swish not being available to all international residents.

READERS REVEAL: What it's like raising an international family in Sweden

Sweden's good performance in these categories nevertheless helped it grab a 44th place in Internations' overall ranking of the world's top 64 expat destinations, while other categories threatened to drag it down.

When it came to the Ease of Settling In Index, Sweden ended up in a disappointing 57th place (though its Nordic neighbours Denmark, Norway and Finland did not fare much better, prompting Internations to write a special report headlined 'It's Cold Up North: Expat Life in the Nordic Countries').

Two thirds of respondents said they found it hard to make local friends (compared to 39 percent globally), and 41 percent struggled with feeling at home in the local culture. This isolation appears to affect international residents' general mood. Sweden came in 61st place for personal happiness, beating only the UK (negatively affected by European residents' concerns about Brexit), Denmark and Kuwait.

“The demand of almost all Swedes I meet is that foreigners have to adapt to the Swedish way of talking, thinking, and acting, but the Swedes don't need to do anything in return,” one respondent from the Netherlands was quoted by Internations as telling the survey.

READ ALSO: Why is it so hard to make friends with the Swedes?

When respondents were asked if they would recommend the country to a friend or colleague, Sweden received a negative score of -23, on par with respondents based in Chile, Ukraine, China and the UK.

Some 20,000 people took part in the Internations survey, with at least 75 respondents per country.

What do you think of life in Sweden? As a paying Member of The Local you are not only supporting our journalism, but you are also able to comment under articles. Just scroll down to comment below.