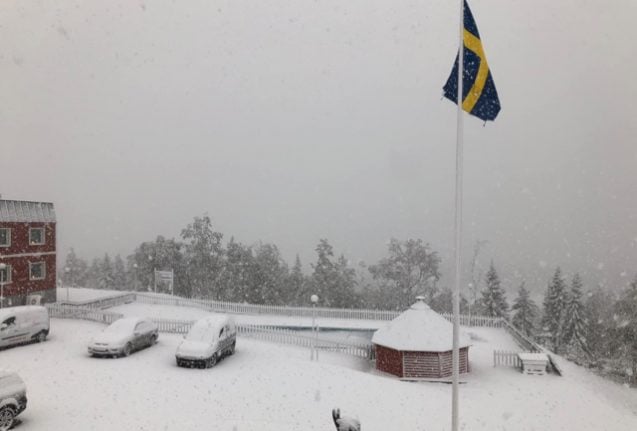 Sweden determines the seasons not based on dates, but on meteorological definitions, according to which winter is considered to have arrived when temperatures drop below an average of 0C five days in a row.

And Tarfala in the Kebnekaise mountains is currently on its fifth day of -3C temperatures. So unless it experiences a sudden heatwave, it means that when the clock strikes midnight, winter has arrived.

READ ALSO: How to dress for cold weather like a Swede

But to make matters more complicated, meteorologists actually consider winter to have arrived on the first day of that five-day period, which means that the winter of 2019 started on September 15th.

In other words: it’s already here.

Here's a picture of the snow at Tarfala:

“Here” depends quite a lot on where you are, though. Sweden is a big country, and temperatures at 3pm on Thursday ranged from 15C in Malmö in the south, to 4C in the northern city of Kiruna.

In the Värmland region, the first snow that fell at ski resort Långberget made headlines in Sweden this week, with hotel owners telling Swedish media it was the earliest first snowfall in at least two decades.

In total around five or six centimetres fell at Långberget on Tuesday, reported public broadcaster SVT. But if you think this sounds early, then spare a thought for Italy, where the first snow of the season fell last week.