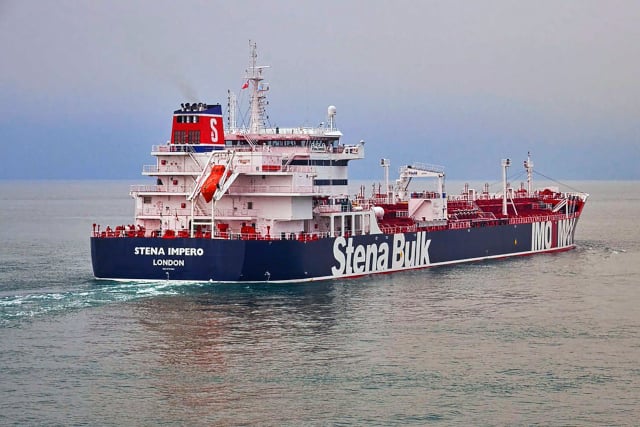 “We received information this morning indicating that the ship Stena Impero is going to be released in a few hours,” Erik Hanell, the chief executive of the Stena Bulk company that owns the ship, told Swedish television SVT.

“We have nothing new to report,” she said.

The ship has been held offshore near Iran's southern port of Bandar Abbas.

Hanell had expressed caution about the tanker's release.

“We understand that the political decision has been taken to release the ship,” he told SVT.

“We hope it will be able to leave in a few hours, but we don't want to take anything for granted. We want to make sure the ship sails out of Iranian territorial waters,” he said.

Iran's semi-official ISNA news agency said the tanker should be released “soon” but noted that there were still some legal issues pending, quoting the head of the local maritime organization.

“Even though the legal procedure for the tanker's departure from Iranian waters is going forward, the case regarding its legal violations is still open with Iran's judicial authorities,” ISNA quoted Allahmorad Afifipour as saying.

“The final hearing process… is being followed and its results will be announced,” he added.

Iranian forces seized control of the British-flagged Stena Impero on July 19th as it was navigating through an international passage in the Strait of Hormuz at the entrance of the Gulf.

Tehran denied the seizure was a tit-for-tat move after British commandos seized an Iranian oil tanker on July 4th as it passed through Gibraltar's waters, under suspicion it was breaking EU sanctions on oil deliveries to Syria.

Gibraltar released the ship – formerly called the Grace 1 but since renamed the Adrian Darya 1 – on August 18th after receiving written assurances from Iran that it would not head to countries under EU sanctions.

Tehran denied it had made any promises about the destination of the ship laden with 2.1 million barrels of oil, and is believed to have delivered its cargo to Syria.

The European Union maintains an embargo on Syria in response to President Bashar al-Assad's bloody crackdown on dissents and rebels.

The Stena Impero had a crew of 23 on board. Seven of them were released on September 4th.