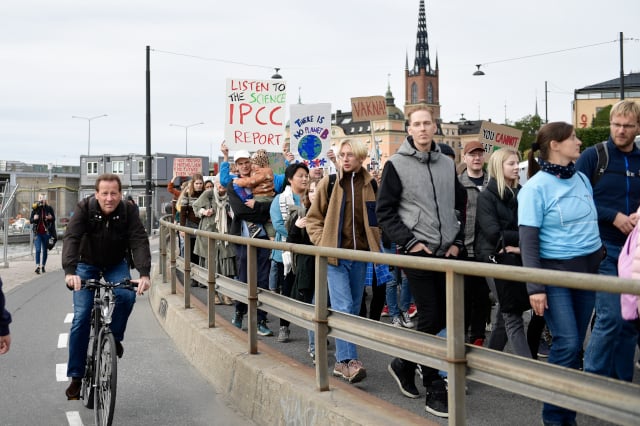 The strikes are organized by Fridays for Future, a global climate movement sparked by Swedish activist Greta Thunberg when she launched her one-girl school strike in Stockholm just over a year ago.

Around 10,000 people are expected to turn out in Stockholm alone, according to police estimates, and climate strikes are scheduled to take place in at least 122 towns across Sweden. More than four million people around the world took part in climate demonstrations last Friday, according to organizers.

The movement is run by young people, but adults are today being urged to take to the streets in solidarity.

So what happens if you do strike? Read on. The school strikes for the climate were started by Greta Thunberg a year ago. Photo: Stina Stjernkvist/TT

Swedish trade unions have been cagey about instructing their members one way or the other, but the three main umbrella organizations for unions – Saco, TCO and LO – have said that although they support the environmental issues, they do not believe that launching a formal strike is the right way to go about it.

Strikes in Sweden are a relatively regulated affair. The country has a low number of annual strike days, with trade unions enjoying strong influence in negotiating labour conditions with employers – and unlike in many countries a strike is seen only as a last-resort weapon that should not be wielded for political gain.

READ ALSO: Why are strikes so rare in Sweden?

Exceptions to the rule are independent unions, for example the alternative left-wing Central Organization of the Workers of Sweden (Syndikalisterna), which indeed urged its members to walk out on Friday.

But a general aversion to formal strikes does of course not in itself prevent employees from taking a few hours out of their day to join the climate demonstration. So what do companies say about that?

Well, some small businesses have said they would happily allow their staff to march on Friday. Many larger firms appear to be more reluctant, telling staff: feel free to demonstrate, but first apply for time off work.

“If you as an employee want to climate strike, our starting position is that you are welcome to do it in your free time. We encourage our colleagues to speak with their line manager to sort out potential leave if you want to take part in the strike,” clothing chain H&M told Swedish news agency TT.

“As far as the strike goes, Ikea is positive if employees want to strike. You have to contact your manager and try to solve it by swapping shifts or taking time off,” said furniture giant Ikea.

Telecoms giant Ericsson questioned the term “strike” for the demonstration on Friday.

“The 'strike' or demonstration that is being planned is not a strike in the usual meaning of the word (as for example strikes organized by trade unions). If you want to take part in Friday's climate activities it is of course possible, but then you have to take time off,” Ericsson told TT.

Not even the Swedish Environmental Protection Agency said it would “strike” on Friday.

“It is positive that people act when it comes to the climate issue, because their engagement is needed to effect change. If our staff choose to take part on Friday it is possible by liaising with their line manager just as you always have to do for leave,” it said. In Sweden, strikes are normally initiated by trade unions with advance warning. Wildcat strikes do happen, and they are not technically illegal according to Swedish law. But if your company has a collective agreement with a trade union, walking out without permission would likely violate that agreement.

So if you simply walk out, you may face disciplinary action. It is also possible that because the demonstration is so high-profile and for a good cause, some employers of the more flexible kind may choose to overlook staff members conveniently disappearing at around the time of the march.

It is also worth noting that many of the marches are set to take place either late in the afternoon or at around lunch time. It is not uncommon in Swedish offices to be able to slip away early in the afternoon on a Friday or take a full hour's break for lunch, so many may be able to attend even without taking time off.

But don't take our word for it. It all depends on the nature of your work and your workplace, and in any case, it is probably wise to first ask your company if they have a policy on this.