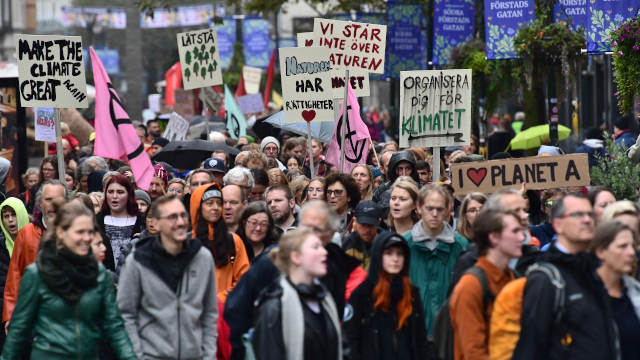 A Fridays for Future climate demonstration in Malmö on Friday. Photo: Johan Nilsson/TT

READ MORE: Can your Swedish employer stop you from striking for the climate?

The strikes were organized by Fridays for Future, a global climate movement sparked by Swedish activist Greta Thunberg when she launched her one-girl school strike in Stockholm just over a year ago.

Around 10,000 people were expected to turn out in Stockholm alone, according to police estimates, and climate strikes were scheduled to take place in at least 122 towns across Sweden. More than four million people around the world took part in climate demonstrations last Friday, according to organizers.

The movement is run by young people, but adults were urged to take to the streets in solidarity.

And by the looks of it, many did. Here's how the day unfolded in Sweden: A picture of the protest in Älmhult, sent in by a reader of The Local A drawing of Greta Thunberg at the demonstration in Stockholm: A so-called “die-in” in Malmö, a protest where participants simulate being dead: