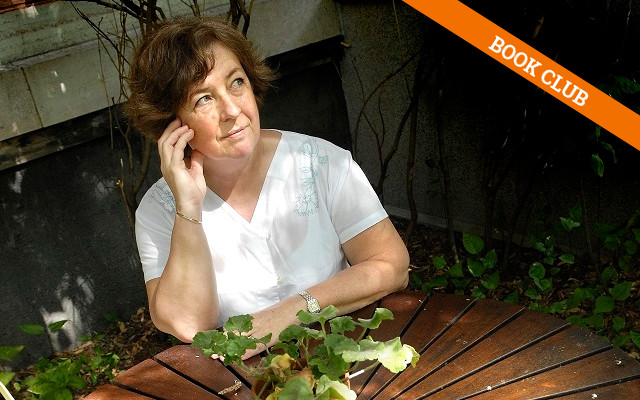 This is a story about sisterhood, identity, grief, and betrayal. When Maria invites her sister Emma to visit her at her seaside home, she immediately regrets the idea and is fearful about Emma's invasion into the solitude she has built up for herself.

When they meet, it's the first time they've seen each other since their mother's funeral two years earlier, and the novel unfolds through their conversations as they recount their lives. Neither woman is what the other had expected.

A Sister in My House is set in Spain and its author Olsson, who is among Sweden's most popular contemporary novelists, has divided her time between Stockholm and Auckland, New Zealand, since 1990. We've read several books by people living outside their birth countries in the Book Club, but this was the first where the protagonist also fell into that category.

I'm sure many of us have found that after moving abroad (or even moving between cities or regions), our friendships and relationships with family have been affected. Geographical distance creates more space for misunderstandings to creep in, which may have contributed to Maria and Emma's problems.

But sometimes it's the case that a move creates a stronger bond. When a friend visits for an extended trip, perhaps staying in your new home and exploring your new hometown, I think it builds an even stronger bond than you build from living in the same place and meeting regularly for drinks. You have the chance for deeper discussions, and that's exactly what happens in A Sister in My House.

This was a book that divided our Book Club, with readers either devouring it in just a few days or finding themselves unable to buy into the sisters' world. Many of us missed the very Swedish landscapes and backgrounds we've enjoyed in previous books such as Wolf Winter, but one reader raised the point that the Swedishness of this novel could perhaps be found in the nature of the protagonists themselves, contrasted with the openness and freedom many of us would associate with the Mediterranean setting.

“I've lived in the Mediterranean and had a visiting sister …. I could relate. It was a bit of light relief after the last few books we have read so I enjoyed it,” – Helen Davies.

“Could the 'Swedish' nature of the story have been the very closed off and ruminative nature of Maria herself? There is an odd undercurrent throughout the novel of suffering alone from the mother to the two daughters in childhood and in the present,” – Sarah Dandelles.

“Being familiar with the sense of loss, I think it was overly simplified. The emotional upheaval was not dealt in any great depth, making it sound like superficial tantrums instead. The Swedish nature of the story was also lost. I was really hoping to find something positive in it but it just didn’t work this time, at least for me,” – Samantha Hammell.

“A slow and gentle read. Two sisters getting together after a long time apart and reflecting over their lives, the choices they made, their interpretations of what they experienced and how that affected. While drinking wine and spending time together, they pour out their souls. The word that I think I am looking for is catharsis,” – Bradley Melton.

Some reviews have been edited for clarity. Thanks to everyone who submitted reviews for this book and joined in the discussion or read along.

What to read next: If you enjoyed A Sister in My House, I recommend reading My Name is Lucy Barton by Elizabeth Strout. This is another family novel that unfolds through conversations and memories, and revolves around a strained mother-daughter relationship.