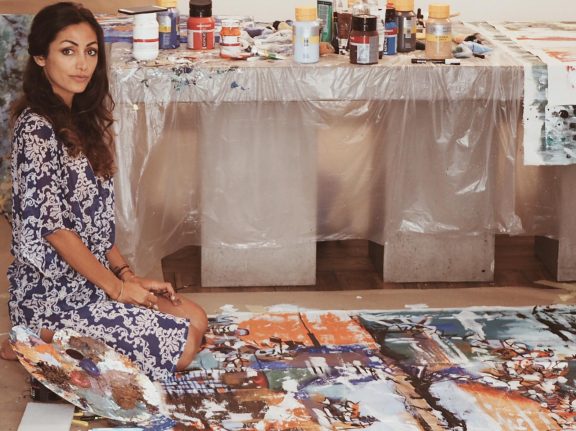 “Growing up in northern Sweden gave me a lifelong connection with the natural world,” says Shams, who was born in Iran but moved to Umeå with her parents at the age of five. “I have a deep love for nature and animals and everything from northerly winter landscapes to being present with the serene peace and quiet of the Nordic wilderness.”

Swedes are well known for their earnest appreciation of nature. Spending time in the great outdoors – a pursuit known as friluftsliv – is more than a hobby; for many Swedes, it’s a way of life. It’s also a huge source of Shams’ creativity, who draws inspiration from both her connection with Nordic wilderness and the traditional Persian poetry of the likes of Rumi and Hafez.

Although it was not until three years ago that Shams discovered painting as a way to channel her creativity, she has a clear artistic vision. Often evoking a sense of the fragility of nature and human life, her abstract expressionist artworks aim to raise awareness of environmental issues – and invite viewers to consider their relationship with the planet in light of the climate crisis.

“I have a burning passion for saving the planet and I want to evoke a sense of how urgent it is for us to act if we want to save life on earth as we know it,” Shams tells SI News. “We, as a planet, are annihilating the only life that we know for sure exists in the universe and it’s really so tragic.”

Shams is currently exhibiting her latest artworks at Norrsken House, an entrepreneurial co-working space on Birger Jarlsgatan 57 in the heart of Stockholm’s trendy Vasastan neighbourhood. Echoing Norrsken House’s spirit of social and environmental concern, the exhibition, titled  ’Until it all fades away,’ fuses a disappointment about the state of the world with a faith in humanity to change its current course.

“The exhibition is purposely a bit melancholic so as to kindle reflection and afterthought,” says Shams. “The art world tends to make art inaccessible and incomprehensible to most people. But my artistic ambition is to make art for everyone and a cue that we have – through our high-paced lives – lost our connection with other living creatures on the planet.” As a token of gratitude and way of giving back to Swedish society, a portion of the profits made from each of Shams’ pieces is donated in the buyer's name to a charity working for environmental preservation, marine life conservation, and animal welfare.

‘Until it all fades away’ is free of charge and open to the public every day until January 2020. More information can be found here.