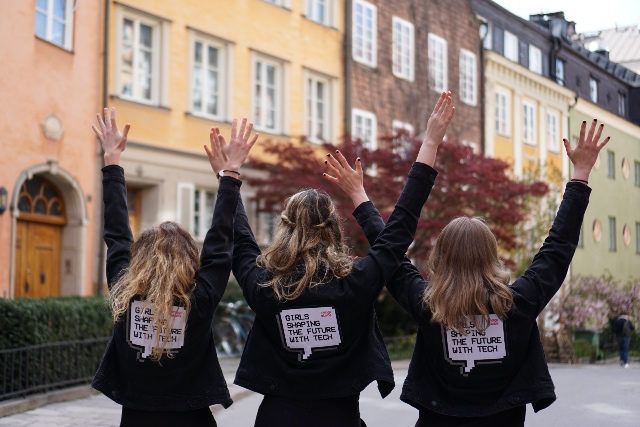 Hungarian biology major Dora Palfi didn’t know what she was getting herself into when she accepted the EIT Digital Scholarship at Sweden’s KTH Royal Institute of Technology to study Human-Computer Interaction and Entrepreneurship. Although she’d always had a vested interest in science and technology – and did a minor in computer science – she had always imagined herself pursuing a career in biomedical research.

“At KTH, I was doing human-computer interaction which has a lot to do with user-centered design, but it was still very new to me,” says Dora, adding that the program’s emphasis on entrepreneurship took her by surprise. “The whole premise of the program was for students to come up with new technologies with the user in mind.” Dora (middle) and her Stockholm team.

Early into the program, Dora was, as part of a course assignment, prompted to identify a user group that could be empowered and for which the playing field could be leveled. This was the starting point for imagiLabs – a one-of-a-kind high-tech solution for female empowerment in the STEM fields.

“For me, it was obvious that I wanted to do something that could get more young girls into tech,” says Dora, who founded the weSTEM (women empowered in STEM) student club during her university years. “All the solutions I had seen and worked with to address the underrepresentation of women in STEM were not very effective and mostly concerned with raising awareness of the problem.”

With the support of KTH’s Innovation Office and a generous grant, over the next six months, Dora and her co-founders Beatrice Ionascu and Paula Dozsa (both NYU Abu Dhabi alumni) conducted market research across Europe and North America to develop the first prototype. The outcome was imagiCharm, a keychain accessory with 64 LED lights that can be programmed – via Bluetooth from your smartphone – to light up in countless colorful patterns. “The basic finding of our research was the importance of self-expression and customization for young girls,” says Dora, adding that imagiCharm allows users to learn a programming language called Python from the ground up. “We also found that teenage girls not only love their phones more than computers but like doing things with their friends and to be part of a community.”

As the project was starting to take shape a year later – and the first hardware prototype was on the assembly line – Dora decided to take an indefinite leave of absence from her master’s program to dedicate herself fully to the fast-growing startup. Through their journey as young female entrepreneurs, Dora and her young global team have become increasingly aware of how disadvantaged women are in tech-related startups – and how few actionable solutions there actually are.

“Our motivation has only become stronger the more we have learned about the tech industry and the startup world,” says Dora. “We have experienced firsthand how crucial it is for girls to have a network in the tech field to get the confidence to create products and start businesses of their own.”

Last Spring, imagiLabs had their first successful financing round, and in March next year, they are set to launch their first product round along with the imagiLabs app. At present, more than 600 keychain accessories have been preordered on Kickstarter – and most recently Swedish popstar Robyn placed another order for Tekla, her annual tech festival for teenage girls.

“We really think what we are doing is so crucial because if you want a more equal future then you need more girls in tech because tech is the future.”

Learn more about imagiLabs and how to get involved here!