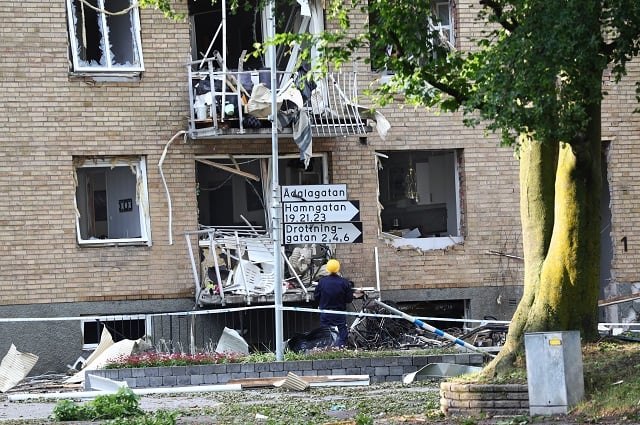 25 people were lightly injured in the biggest explosion this year, in Linköping. Photo: Jeppe Gustafsson / TT

The frequent use of explosives is a relatively recent phenomenon, and criminologists told The Local that the blasts can be seen as part of an overall rise in violence and growing recklessness in these criminal networks.

Amir Rostami, a police superintendent turned sociologist with a focus on criminal gangs, told The Local that so-called 'street gangs' are showing an increased tendency towards violence, and that this violence was becoming more severe when it took place.

“If previously they maybe fired one shot or shot someone in the legs, today it's more about AK47s, using more bullets, hand grenades and explosions that we didn't see before. I'd say that's the biggest shift we see – they're more reckless, they don't seem to care about the consequences,” Rostami said.

Fatal shootings linked to criminal gangs have increased from around four per year in the early 1990s to over 40 in 2018. And while the blasts that have taken place in Sweden have caused no fatalities so far this year, they could be seen as a sign that the gangs are unafraid of causing damage and potentially harming people. A major explosion in Linköping earlier this year was described as 30 to 40 times as big a charge as previous attacks, with police saying it was a “miracle” no one was seriously hurt. Police in Malmö have previously told The Local that blasts in the Skåne city are becoming more powerful over time.

One possible reason is simply the materials available to members of these networks.

Police have reported a recent trend to use handmade devices using plastic explosives, which cause more powerful blasts than the hand grenades dating back to the Balkan conflicts and the imported bangers which were typically used in earlier years. The Local approached Swedish police for further information about the materials commonly used in explosions, as well as the average size of explosions and numbers of any injuries and fatalities caused, but the police press office declined an interview due to a busy schedule.

Most of the explosions have targeted empty buildings or vehicles, suggesting that causing harm to people is not the intention. Targets of explosions have included apartment blocks, police stations and government agencies, and nightclubs.

“It seems likely that a lot of the time it's about sending a message rather than actually hurting someone,” crime researcher Manne Gerell told The Local. “But [the motives are] largely unknown since most cases aren't solved, and it's unknown the extent to which the explosions are performed by non-gang members.”

In fact, only one in ten cases involving explosions were resolved by police in 2018, and this low clearance rate can partly be explained by a culture of silence in criminal environments, making it hard for police to get evidence from victims and potential witnesses. When it comes to explosions, the rate at which cases are solved is even lower than for gang-related shootings, perhaps also because so little evidence is left behind by a blast. Gerell said that police were working at increasing trust in the most seriously affected neighbourhoods and also worked closely with victims.

“Police work on increasing trust in general terms in these neighbourhoods, and more specifically they sometimes work with something called Family Liaison Officers which is a concept taken from the UK, which are used to get a better connection with the victim or victim's family and friends, so they can get a better relationship that might lead to more evidence,” he said.

Sweden's crime rate remains one of the lowest in the world. Despite a rise in murders linked to gangs since the 1990s, there has been a reduction in murders linked to domestic violence, hate crime and 'spontaneous fights', meaning the overall homicide rate is lower today than in the early 1990s.

But rise in criminal gangs willing to resort to fatal violence is still a cause for concern both at home and abroad. Earlier this year Denmark reintroduced border checks with Sweden after two bombings in Copenhagen which were linked to a Swedish gang conflict.

Law and order, including crime reports, accounted for 35 percent of TV news coverage between August and September this year and the subject often dominates political debate, including ahead of last year's general election.

While members of the public are unlikely to get caught up in the conflicts, the fact that this violence typically happens in the streets and public spaces not only increases the likelihood of bystanders being put at risk but also has consequences for perceived safety. “If you live in an area that has hand grenades and shootings, it creates fear and maybe a feeling that society doesn't have the capacity to handle these serious problems. It erodes trust in the state and institutions, especially with a very low clearance rate. There are no consequences,” notes Rostami.

This included giving police increased powers to carry out searches of suspects' homes and to read encrypted communications on suspects' devices, for example, and more available places at Sweden's homes for people with serious substance abuse and psychosocial problems.

But for Rostami, the essential thing is not just introducing new measures, but doing the hard work to ensure they have impact.

“It's not about having more resources, but how they distribute the resources. I'm not sure new legislation or new tools will solve the issues. We need to improve the effectiveness of our crime-fighting agencies and I think the intention is there, but the proposals are more or less cosmetic and we're not getting the results expected. We need to go to the root causes of our inability to fight this.”