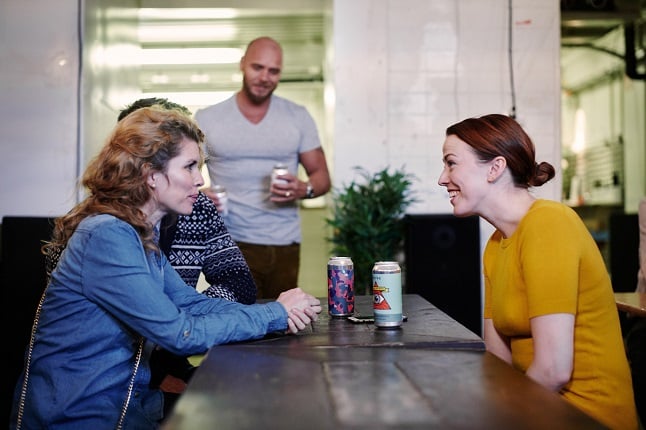 These events will give you something to look forward to in the November darkness. Photo: Felix Odell/imagebanksweden.se

All Saints Day is a subdued affair in Sweden, but Shockholm is a Halloween event started by a New Yorker to bring the festivities he missed from home to Stockholm. It's all about costumes (with prizes for the best), music, and bringing people together. Entertainment and children's activities start from 3.30, with a costume parade through Stockholm's old town from 6pm. The event is free to attend.
Halloween Mash with Stockholm Brewers Festival

Beer-lovers are invited to don their scariest costumes and head to this party promising “scary music, delicious food, and a pumpkin carving contest with prizes”. It's free to attend.

Gender Equality in Sweden, where we are today?

Sweden may have a global reputation as one of world's most gender-equal societies but when it comes to female representation in business, it might be not so black and white. In an interactive, moderator-led panel discussion, five panelists from the private and academic sectors will shine some light on the status quo of gender equality in Sweden today and the efforts that are made to advance gender-balanced leadership locally and within the larger international context.

Green Drinks is a free monthly informal social for people interested in green issues. In November, we will be celebrating one year of Green Drinks in Stockholm. We will look back at 12 themed talks/workshops and three homes and get crafty and upcycling shiny materials into reflectors to get ready for the dark winter coming up! Refreshment and materials will be provided free of charge.

“English rose; songs & stories from the 40´s” is a show based on real life stories from WWII tied together by musical pearls from the era. This show is 3´s Company´s first musical theatre piece based on their respective families ́ history from the Second World War and is written and directed by Colleen Clayton. Tickets can be purchased in advance here.

Where: Hotel at Six, Brunkebergstorg 6

How did you imagine 2019 would look like ten years ago? Or 20 years ago? Now, we have technology making our life smoother with things like facial recognition to chip implants, better medicine than ever, expansive art and so so much more. But we’ve also got more issues to tackle than ever, from climate change, inequality, societal issues and more. At TEDxStockholm, speakers will explore the theme of Fast Forward, sharing their ideas for a better tomorrow. At the time of publication, 85 percent of tickets had already sold out but Last Minute tickets were on sale here for 654 kronor.

When: All Wednesdays in November and until December 18th, 7-8.30pm
Event by: Stockholm Improv Comedy

The Splash will perform a fast-paced comedy show made up on the spot. You’ll never know what will happen each week, but you know it will be interesting to watch! Shows are performed in English. Tickets cost 80 kronor and can be bought in advance here.

Buying an apartment/a house in Sweden?

Are you looking at buying a house or an apartment in Sweden? Or maybe you are just tired of renting from private landlords and want to see what other options are available. The International Citizen Hub in Lund has invited a real-estate agent from Bjurfors real estate agency, who will guide you through the legal differences and cultural clashes when it comes to buying real estate in Sweden.

This show will feature true stories in English from am International lineup of writers, comedians and actors. Included in the ticket is a delicious organic meal (soup or main course) from the yoga bar’s gourmet chef, Maria Ljungstrand. The price for the show and dinner is 180 kronor, and you can get tickets by emailing [email protected]

At this event you will be guided through the basics of the banking and savings system in Sweden and get some useful tips on how to save or invest through a Swedish bank.

The International Citizen Hub in Lund has invited representatives from three different schools in Lund and Malmö to speak about the IB programme and the national Swedish school system. This will give you a better idea how the two systems differ and how it may affect your child's chances of eventually being accepted into either a university outside of Sweden or a Swedish University.

Spend a relaxed Friday night at the pub with other internationally-minded folk at The Bishops Arms Mollberg.

How can individuals join or start up new associations? What does an association expect from its volunteers? At this event you will get the answers. In Lund there is a long tradition of organizing in associations. They are among other things a big part of the university and its student culture, but also a vital aspect of Lund municipality.

Get inspiration from an international newcomer and learn more about the creative co-working and event spaces of Mindpark. The International Citizen Hub in Lund has invited two speakers to talk about the importance of networking. Karsten Deppert from recently opened MindPark in Lund, creative co-working and event spaces in southern Sweden and Janine Miller, coach and mentor supporting other internationals.

Where: HIC Offices, Drottninggatan 7A, Helsingborg

Join other internationals for coffee, cakes and chat in the centre of Helsingborg. This is a perfect way to get to know other people in the local community and to build your network.

Make your own Christmas wreath at Fredriksdal Open-Air Museum and Botanical Garden. The event costs 320 kronor and requires a minimum of ten participants to take place. Register for your spot here.

Event by: Naturskyddsföreningen (the Swedish Society for Nature Conservation)

A film festival with a focus on the environment and sustainability. Tickets are 110 kronor for one day and 200 kronor for the weekend, with discounts for Naturskyddsföreningen members, and can be reserved online. Note: the festival says it welcomes international visitors and that many films will be in English or will have English subtitles, but not all of them. You can contact the organizers via Facebook if you have questions.

Do you know of events for English-speakers around Sweden? Submit your December event here before the end of November to get it included in next month's What's On guide on The Local.