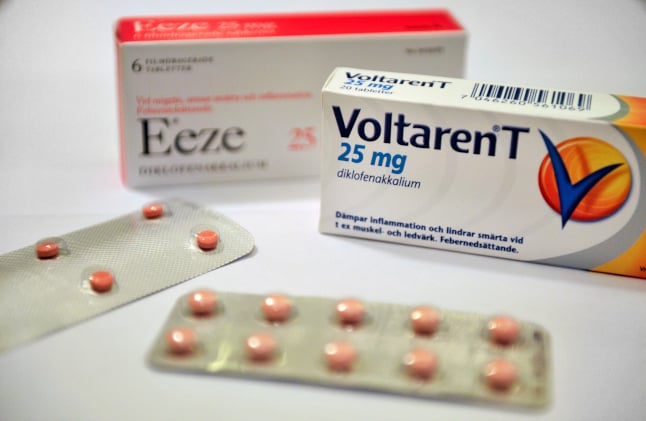 Oral painkillers containing diclofenac will no longer be available over the counter. Photo: Jessica Gow/TT

Diclofenac is a nonsteroidal anti-inflammatory drug (NSAID) used to treat pain and inflammation, for example migraines. It is the active substance in common painkillers such as Voltaren, Ignorin and Eeze in Sweden.

But from June 1st, 2020, diclofenac pills and capsules will become prescription-only.

This comes after a major study in 2018 noted a small risk of artial fibrillation, stroke, heart failure, heart attack and death due to cardiovascular disease, even among people using relatively low doses of diclofenac (less than 100 mg/day) during a short period of treatment, said the Swedish Medical Products Agency.

The new study supports the theory of “increased risk of cardiovascular side effects, that have been known to exist for some time, even at lower doses and short-term use”, said Paulina Tuvendal, clinical investigator at the agency, in a statement this week.

“The decision to make diclofenac prescription-only increases the safety of the patient by allowing doctors to inform of the risks as well as make an overall assessment of whether there is a risk of cardiovascular impact.”

Last year, 2.6 tonnes of diclofenac, which is available in both oral form and gels, sprays and plasters, was sold over the counter in Sweden, and 1.4 tonnes on prescription.

The drug has been a major topic of debate in the EU in recent years, and member states have previously agreed to review their prescription rules. Diclofenac is currently sold only on prescription in around one-third of European countries, according to the Swedish Medical Products Agency.

In Sweden, customers in need of non-prescription painkillers are instead advised to use paracetamol, ibuprofen or naproxen, but are urged to contact their doctor if they are experiencing long-term pain problems.

Non-oral diclofenac medication is not affected by the risk of cardiovascular side effects and will continue to be sold over the counter in Sweden.