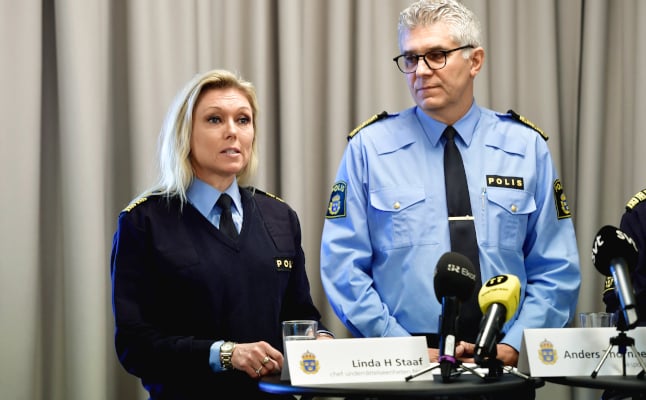 Regularly placed near the top of the UN's Human Development Index and among the world's richest countries in terms of GDP per capita, the Scandinavian country is facing an unusual challenge as bombings become a regular occurrence.

“I understand that many people are worried about what is happening, there's a sense that the criminals' vendettas are creeping closer to the general public,” he said.

In the past week alone, a bomb exploded in a stairwell in a Malmö apartment building, an explosive device was found outside a shopping centre in the southern town of Kristianstad, and a blast rocked the balcony at a block of apartments in Hässleholm in southern Sweden.

While few of the blasts have caused serious injuries, the national bomb squad has been called out to investigate around 100 explosions in the first 10 months of the year.

That's more than double the number for the same period last year. In addition, more than 70 undetonated devices have been investigated.

“You have to conclude that this has become a trend, one that is escalating,” Linda Staaf, head of the national police's criminal intelligence unit, told AFP.

Apartment buildings, small businesses and police stations have been targeted.

The bombs have varied in size, with some the equivalent of large fireworks while others have been larger: in June a blast ripped apart the facade of two apartment buildings in the town of Linköping. The full picture behind the bombings is complex, and overall Sweden remains a country with low levels of violence.

“It seems likely that a lot of the time it's about sending a message rather than actually hurting someone,” crime researcher Manne Gerell told The Local last week. “But [the motives are] largely unknown since most cases aren't solved, and it's unknown the extent to which the explosions are performed by non-gang members.”

The bombings are largely the result of vendettas between criminal gangs, Staaf told AFP.

Criminals have increasingly been using explosives over the last several years, but while they previously preferred hand grenades and other factory-made explosives, they have recently shifted to home-made and more powerful devices, Staaf said.

The reason for the shift was unclear, but police have established a pattern in the criminals' choice of weapons, she added.

While they use bombs to threaten, intimidate and blackmail targets, they use shootings to kill and eliminate enemies.

Sweden's main daily Dagens Nyheter also reported in October that deadly shootings of men aged 20 to 29 had increased by 200 percent between 2014 and 2018.

The violence in criminal circles has grown more severe over time, Staaf said, as vendettas, usually stemming from the drug trade, are often aimed at out-doing the other side rather than responding in a tit-for-tat manner.

“Sometimes the original dispute has been long forgotten, and it's just about retribution,” Staaf told AFP.

She said most of the perpetrators had grown up in areas the Swedish police describe as “vulnerable”.

In June, the police published a list of some 60 such areas in Sweden, characterized by poor socio-economic conditions where “criminals have an influence on the local community”.

For youths growing up in these areas with little hope or prospects, violence becomes a way to make a name for yourself.

“We have examples of people who have quickly gained a lot of prestige by fatally shooting someone, on someone else's behalf,” Staaf said. Around 25 people received minor injuries when a bomb exploded outside a building in Linköping in June. Photo: Jeppe Gustafsson/TT

“In most cases it's pure luck that more people haven't been injured or killed,” Staaf said, adding that perpetrators seem to show little concern for innocent bystanders.

There have however been a few fatalities, and the deaths of two young children in two separate incidents in 2016 and 2015 that sparked outrage.

Most of the violence targets criminals or increasingly their families, but bombings have also been carried out over love triangles and even “just for fun”, Staaf said.

When it comes to other types of violent crime, Sweden is still at low levels.

A study by the National Council for Crime Prevention in June concluded that while violent crime had risen in the country, it was still below levels recorded in the 1990s.

And while killings in criminal circles were up, murders within families had decreased.

Article by AFP's Johannes Ledel and edited by The Local