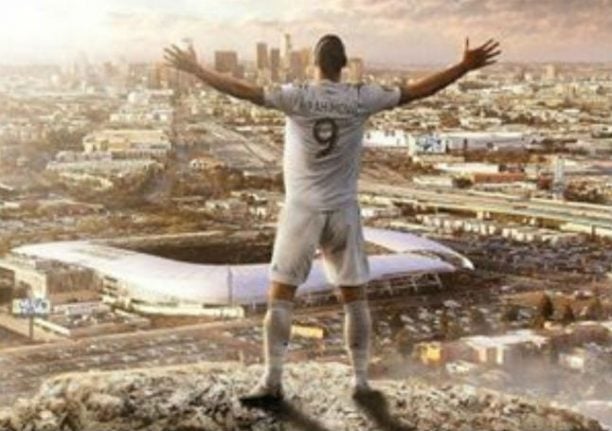 Zlatan posted a triumphant final image on Twitter. Photo: LA Galaxy
The 38-year-old striker's departure from the Galaxy had been widely expected following the club's elimination from the Major League Soccer playoffs last month.
Ibrahimovic, who joined the Galaxy in the opening months of the 2018 campaign, announced the end of his Californian sojourn in a characteristically enigmatic post on Twitter.
“I came, I saw, I conquered. Thank you @lagalaxy for making me feel alive again,” Ibrahimovic wrote. “To the Galaxy fans – you wanted Zlatan, I gave you Zlatan. You are welcome. The story continues…Now go back to watch baseball.”

I came, I saw, I conquered. Thank you @lagalaxy for making me feel alive again. To the Galaxy fans – you wanted Zlatan, I gave you Zlatan. You are welcome. The story continues…Now go back to watch baseball pic.twitter.com/kkL6B6dJBr

The Galaxy issued a Thank You Zlatan video showcasing some of the Swedish star's top moments at Galaxy.
“We would like to thank Zlatan for his contributions to the LA Galaxy and Major League Soccer,” said LA Galaxy President Chris Klein.
“Since his arrival in 2018, Zlatan has positively influenced the sport of soccer in Los Angeles. We are grateful for his work ethic and passion. We thank Zlatan for his professionalism and immeasurable impact on the Los Angeles community and the soccer community in North America as a whole.”
READ ALSO:
Ibrahimovic has been strongly linked with a return to Italian club AC Milan, where he played for two seasons between 2010 and 2012, scoring 42 goals in 61 league appearances.
Major League Soccer Commissioner Don Garber hinted last week that Ibrahimovic may make a return to Italy, telling ESPN in an interview the striker was being “recruited” by Milan.
Ibrahimovic has also reportedly been targeted by Serie A side Bologna, according to Italian daily Corriere dello Sport.
Although Ibrahimovic was unable to help Los Angeles Galaxy return to the pinnacle of Major League Soccer, the Swede has been one of the most successful foreign players ever to grace the league, scoring 53 goals in 56 regular