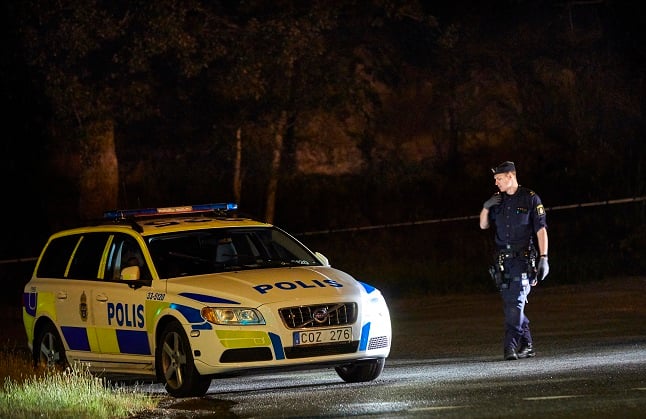 A police officer in Sollentuna following a murder in the suburb this August. Photo: Fredrik Persson/TT

“A man was shot in broad daylight right across the street from where I live,” said one reader, who lives in the Stockholm suburb of Sollentuna and first moved to Sweden a decade ago.

“I had heard of some burglaries and there was a shooting back in 2016. However, the recent one was in broad daylight, hardly a metre away from where I get my groceries,” said the reader, who preferred to stay anonymous.

In general, he believed that Sweden was a safe place to live, and noted that police presence in the area had increased, but added “reports of gang violence are alarming”.

Sweden's general crime and homicide rates are low, both compared to previous decades and on an international level. But while murders linked to domestic violence, street fights, and hate crimes have decreased, gang-related murders have risen in recent years, and the use of guns and even explosives has become more common.

A Portuguese resident of Stockholm who spoke to The Local meanwhile expressed his fears that news reports exaggerated the problem of violence.

Tiago said he considered Sweden to be “very safe, even in the worst areas” and contrasted this with Lisbon, where he was a victim of multiple mugging attempts each year.

“Things should be seen in perspective, any crime increase in Sweden can be seen as a big thing but you have to compare it with other European countries. It feels much safer walking in the street in Stockholm than in Lisbon,” he said.

This experience was shared by a Brazilian marketing professional in Stockholm.

“Sweden is by far the safest place I have lived in. That is the single best thing about living in Sweden; you never have to worry about whether someone is following you while you walk home, whether you can use your phone outside late at night and so on,” the marketing professional said.

Most of the respondents noted that the overall level of crime was low, and commented on Swedish habits such as leaving phones and wallets on tables while getting up to order or go to the toilet. But others shared their worries about gang-related crime, which has occurred in recent years in both suburbs and central areas of Stockholm and Malmö.

Peter, a German engineer who moved to Malmö in 2018, said he was aware of crime but still felt very safe in Sweden.

“I know it's happening, it's a recurring topic among friends but I never experienced or witnessed any and non-criminals don't seem to be targets,” he said.

He said the southern city was “still quite calm” compared to other large European cities he had lived in, and said that international news overstated the extent of the problem without including context on the background and causes of the violence. “In international news it's less of 'ongoing gang-violence' and more of 'the end is nigh.” An area close to  the Triangeln shopping centre is cordoned off by police following a shooting. Photo: Johan Nilsson/TT

For António, originally from southern Europe and a resident of Malmö's central Triangeln district, a square regularly patrolled by police as part of a clamp-down on drug trade, the reports of crime occurring nearby had had an impact.

“Living in the centre of the city, you would expect things would be quieter compared to so-called 'problematic areas',” he said.

He explained that bombings, murders and street fights had occurred not far from his home, including the city's first fatal shooting of 2019.

Although he had not been the victim of crime personally, he commented: “This has an emotional impact on your daily life because you have no real peace and comfort. And topping all that, there's a general feeling that authorities don't have a real answer to make people safe.”

“Coming from Western Europe you are used to the occasional robbery or assault, but here it seems more random and that it could be anyone next. Nothing ever happened to me but there's too much happening to not think that one day it could be me.”

He argued that news media had a role to play in increasing public safety, and said he would feel safer if outlets also reported on preventative measures taken by police and successes in law and order.

Thanks to all the readers who responded to our questions about crime in Sweden. We appreciate you taking the time to respond, and your answers help inform our understanding of our community's experiences and concerns.