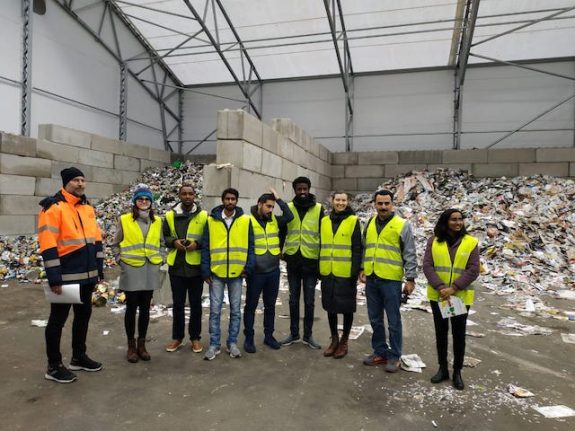 Photo: Nisha and her fellow students

Ever since I got news of my SI scholarship, I was so excited to learn more about Sweden, its culture and lifestyle. I had left no media unturned where I could find information about Sweden. From the dark winter to Systembolaget, I searched for all the information I could find. And then waste management in Sweden caught my attention. I got to know that Sweden recycles 99% of its waste which was the most fascinating fact for me as, in my country, waste management is a headache for the government because of the growing population, particularly in cities. Though for now, we are surviving on landfilling which is not sufficient to process waste so, I wondered, how is Sweden able to manage its waste?

On the very first day I came to live here in Karlskrona, I was given a waste separation brochure by my housing company. It was fascinating to see how they separate waste. The first thing I thought was 'wow!'. If we can separate them at the source level then almost 90% of problem will be solved. It’s just the matter of putting in a little effort and forming a regular habit. Indeed, it was not easy when this separation thing was launched but in due time people got used to it. And yes, it’s never late to adopt good habits! We planned a trip to the Mältan, a waste management site in Tippvägen, on the north of Karlskrona as our yearly planned activity. On 15th November 2019, finally I got the chance to dig inside of the waste management thing. Avfall Sverige – the Swedish Waste Management Association which is owned by the municipality converts all the waste into resources in Sweden. We were given a remarkable presentation by Robert Malmgren, who is a product manager at the company, regarding how the company actually makes efforts to keep Karlskrona clean and green.

The site of Mältan is more like a collection center where the waste from the town is collected and kept separately and transported to recycling centers of Kalmar or Malmö for further processing. Robert explained that the waste is kept in a shaded area so that it won’t get rained on (which makes it heavy and can damage it) and they won’t have to incur losses in terms of transporting something which is not of the exact weight. In addition, we made a short walk to their landfill area where they are currently doing landfill — this collection of landfill in sacks was also a new thing for me. He explained that they pack the waste in sacks so that it won’t cause land and water pollution. And the place will be safer in future as well. He explained that although they have an incineration plant, they are not allowed to burn anything except wood as it will affect the houses near the surrounding. All the producers, consumers, households, businesses and municipalities are responsible for eliminating waste and managing waste. It is not only the responsibility of the government to manage waste from the producer to the consumer — all households are responsible for waste management. We got insights regarding waste hierarchy, something which I have never heard before i.e. waste prevention, reuse, material recycling and biological treatment, energy recovery and disposal. This value chain must be followed everywhere to prevent the world turning into a dumping site and stop the effects of global warming. Isn’t this a thing to consider before we produce any more waste?