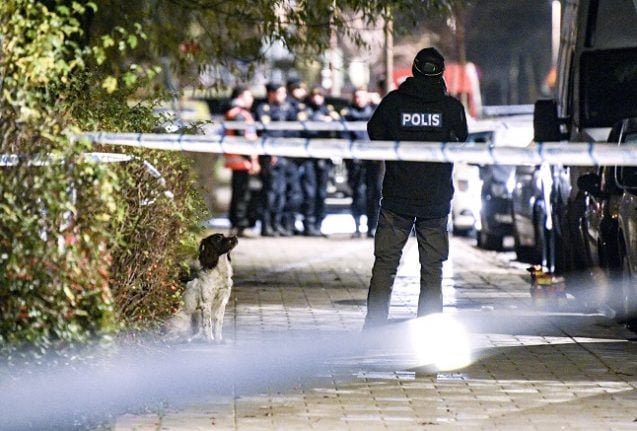 A police team at work after a fatal shooting in Malmö. Photo: Johan Nilsson / TT

“People in Malmö feel more unsafe than they need to,” said Mattias Sigfridsson, acting police chief for the region.

Each year, the police carry out a survey to measure the level of perceived safety among people in the city. The survey is sent to 7,000 randomly selected Malmö residents aged between 16 and 85, and this year just over half completed the survey.

Perceived safety had risen slightly since the previous survey, but fear of crime remains higher than it needs to be, according to Sigfridsson. Just under three quarters (74 percent) of the survey respondents said they were worried about being exposed to crime of some kind.

“That's a worry that the crime statistics show you don't need to feel,” he said.

The total number of shootings in Malmö has almost halved this year compared to last year, but the incidents that have happened – including the killing of a 15-year-old boy and a young mother who was fatally shot in broad daylight – have had a significant impact on residents.

“The most serious crimes have become more reckless. They have become more brutal, and this type of crime worries people. Malmö is also quite a small town geographically, which means you are often close to these crimes and that affects us,” said the police chief.

A local police chief in northern Malmö, Andy Roberts, said that an unbalanced depiction of Malmö in the media also contributed negatively to residents' perceived safety.

“There are often dark newspaper columns about Malmö, we shouldn't underestimate the image and the psychological impact that creates. There is really a lot of focus on the negative, both in the mass media and from police,” said Roberts.

But he said non-violent but visible crime or anti-social behaviour was another potential contributing factor, including littering, rowdy groups of young people on the streets, and the drugs trade.

“It is clear that it's important to work with this problem. Drugs are a part of the problem which leads criminal networks to kill each other,” he added.

Malmö police have previously highlighted the role of the drugs trade in gang crime and violence, and begun cracking down on it as part of their efforts to continue reducing violent crime.