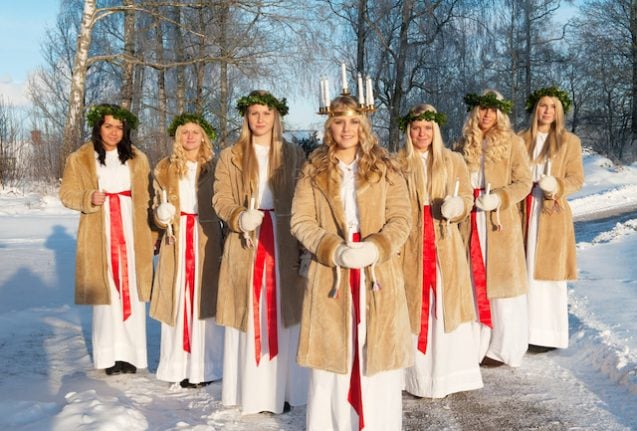 You’re probably surprised to find that Sweden, a secular country, is so committed to celebrating a Catholic saint. But the Swedes do love their traditions and Lucia on 13th December is one of the season’s big events.

Early in the morning in schools and workplaces, a nominated girl or young woman will wear a white dress and don a crown of (LED) candles on her head. You may also spot processions of children all dressed in white, the girls wearing the candle wreaths – boys too will join as Lucia’s assistants known as ‘star boys’, also wearing white robes but instead of crowns they wear white pointed hats. So, who is this Lucia that the Swedes commemorate each year? According to biblical apocryphal texts, Lucia – or Lucy – was the daughter of a wealthy Sicilian family.  Her father died when she was five years old and her mother, Eutychia, arranged for Lucy to marry a young man from a wealthy pagan family.

Unknown to Eutychia, Lucy had vowed herself to God in the tradition of St. Agatha. She refused to marry and spurned all worldly possessions, instead wanting to distribute her dowry to the poor. News the she was planning to do this reached her suitor who, angry that the patrimony and jewels he believed rightfully belonged to him were being given away, denounced her to the Governor.

When the guards came to take Lucy away, the story goes that they were unable to move her. They even tried hitching her to a team of oxen but still the girl could not be moved. Thwarted, they condemned her to death by fire but she could not be burned. Finally, she died by sword and upon her death became a Christian martyr, venerated each year on 13th December.

It’s unclear how St. Lucia became such a significant figure in Swedish tradition. Under the Julian calendar, which Sweden followed until the 18th century, December 13th was the shortest day of the year. It was traditionally said that a maiden dressed in white robes wearing a crown of candles brought food to starving visitors. There may also be links to the German tradition of girls dressing as ‘Christ children’ and handing out presents. Sweden’s Lucia celebrations are often accompanied by glögg (sweet mulled wine), lussekatter (the previously-mentioned saffron buns with raisins), pepparkakkor (ginger snaps), and music, particularly the song Santa Lucia which has been given Swedish lyrics speaking of St. Lucia bringing light to the darkness (something we welcome in Sweden during this dark time of year!).

If you’ll miss out on the celebration in real life, you can always watch it on television. On the morning of the 13th, SVT broadcasts a traditional Lucia celebration.