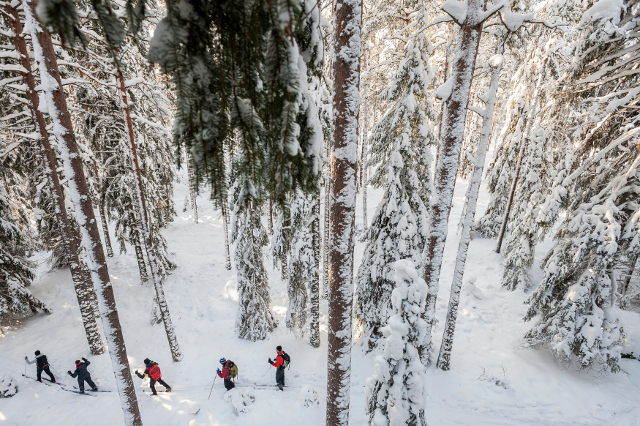 Let's go skiing, they said. It will be fun, they said. Photo: Fredrik Schlyter/imagebank.sweden.se

This article is available to Members of The Local. Read more membership exclusives here.

I've just spent a whole week on the Swedish side of the Norwegian border, with two extremely long and thin skis strapped to my feet.

I was told these things were called “cross-country” skis, and offered a more relaxed and enjoyable skiing adventure. In case you've never tried it or seen it on prime time Swedish TV (yes, seriously), cross-country skiing is essentially power walking with skis on your feet, usually on flat surfaces rather than downhill.

Forget about the perils of hurtling down the hills on the slalom slopes, cross-country is the best way to enjoy the outdoors in the Swedish winter (my Swedish fiancée and her family said).

My, how wrong they were.

But before we get into what I quickly realized was the most pointless pastime of the Swedes, we need a bit of context.

I'm a terrible skier. In fact, readers of The Local Sweden chewed me up and spat me out last time I complained about skiing, way back in 2012. There, I wrote that I just couldn't stand the discomfort, the danger, and the sheer senselessness of downhill skiing.

Sure, I'd been left in excruciating pain after I dislocated my shoulder during that fateful trip and vowed never to don skis again – and to tone down the complaining.

But now I've got a kind and loving Swedish woman by my side who promised me that a week of skiing with her family in the woods would be a much better experience.

“And besides,” she said, “it's cross-country skiing. Even if you fall you can't get hurt. You're never going faster than walking speed.”

My, how wrong she was.

It was probably three minutes before I fell the first time, in the car park. I'd just attached my skis and hadn't even reached the track yet.

My second fall was at the hill that led to the first track, about two minutes later.

“I thought there weren't any hills,” I grumbled.

My, how wrong I was.

Turns out there are plenty of small slopes, but because your skis are always (supposed to be) inside these dug-out tracks, you're told to bend low and just let the track take you down the hill.

I gradually got better at the downhill parts, but what I couldn't for the life of me understand was the point of it all. If you're on perfectly flat ground, it's a huge effort to get momentum, so beginners like me were essentially waddling across the snowy plains. If you go uphill, you're absolutely waddling and you have to walk with your skis almost at a right angle to one another otherwise you'll slide backwards to your doom.

If you try to stride like the experienced Swedes, you're bound to fall over. That kind of finesse only comes with a lifetime of experience, I realized.

I looked at the whole family, my soon-to-be in-laws, and I wondered why they were spending four days marching through the snow. It seemed to me as pointless as going for a walk on a beach while wearing diving flippers.

Suddenly I found myself yearning for the adventure of the slalom hills, the risks of falling and rolling (to your doom). The skills in adjusting your pace, avoiding the other skiers, coming to an abrupt sideways halt and sending the snow flying.

But no, we were marching in single file for hours through the snow on skis so narrow that if you weren't perfectly balanced then you'd topple over. And believe me, I'd know.

By the end of the fourth day, when I thought I'd pretty much figured it out, I was convinced to take a more advanced track through the woods. The hills were steeper, the tracks seemed thinner, and the obstacles more plentiful.

It only took about ten minutes before I swerved to avoid a tree and, once again, dislocated the same shoulder that I'd dislocated six years ago.

I decided to walk back to the cabin. It was then I really got thinking about how pointless it all seemed to me. I just couldn't, for the life of me, understand why Swedes would actually do this to themselves for a week at a time.

Was it because it's physically impossible to go hiking when the snow is so deep, and skiing is the only option? Was it a sense of camaraderie that somehow isn't available by sitting around the fireplace in the cabin? Was it some kind of freedom that can't be found on the other end of a flight to the warmer climes of Southern Europe?

I don't know. Maybe it's the Australian in me that prevents me from ever truly enjoying the snow. I suppose I'll try it again in another six years. Maybe in a different form.

As for now, I better ice that shoulder again. 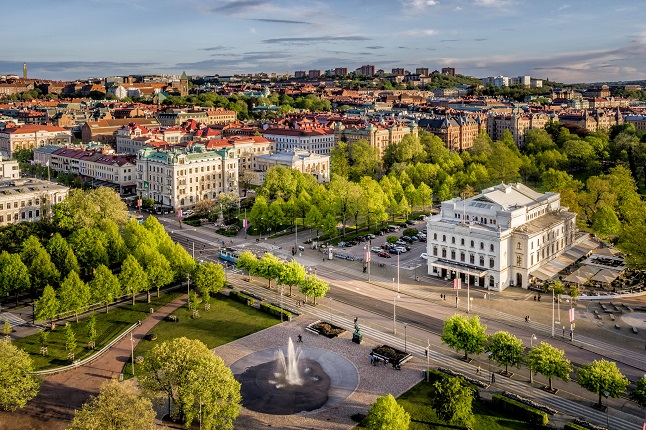 Which neighbourhood of Sweden's second city is right for you? Photo: Per Pixel Petersson/imagebank.sweden.se

First of all: where to look? The city of Gothenburg suggests on its website that sublets, houses and townhouses to rent all across West Sweden can be found on Blocket, a popular digital marketplace (in Swedish).

Other alternatives for rentals include the sites Bostaddirekt, Residensportalen and Findroommate, as well as Swedish websites like Hyresbostad and Andrahand. Note that some of the housing sites charge a subscription or membership fee. There are also Facebook groups where accommodation is advertised. An example in English is Find accommodation in Goteborg!.

If you’re buying, most apartments and houses for sale in Gothenburg and West Sweden can be seen on the websites Hemnet and Booli. Local newspapers often have property listings. Real estate agents (mäklare) can also help you find a place.

Majorna is a residential area in Gothenburg that has transformed from being a classic working-class district to becoming a hip and restaurant-dense cultural hub in Gothenburg. The buildings typical for Majorna are three storey buildings with the first storey built in stone and the topmost two built with wood — the houses traditionally called Landshövdingehus. This neighbourhood just west of the city center, beautifully positioned between the river Göta älv and the park Slottsskogen, is hugely popular with young families.

Majorna was traditionally populated with industrial workers and dockers. The area is still supposed to have a strong working-class identity, with many people living in Majorna seeing themselves as radical, politically aware, and having an ‘alternative lifestyle’.

This doesn’t mean, however, that one can live in Majorna on a shoestring. The average price per square meter here is approximately 55,000 kronor as of May 2021, according to Hemnet.

From the centre of Gothenburg it’s only a short bus or tram ride across the river to Hisingen. It’s Sweden’s fifth largest island – after Gotland, Öland, Södertörn and Orust – and the second most populous. Hisingen is surrounded by the Göta älv river in the south and east, the Nordra älv in the north and the Kattegat in the west.

The first city carrying the name Gothenburg was founded on Hisingen in 1603. The town here, however, was burned down by the Danes in 1611 during the so-called Kalmar War and the only remnant is the foundation of the church that stood in the city centre.

Hisingen housed some of the world’s largest shipyards until the shipyard crisis of the 1970s. Over the last 20 years, the northern bank of the Göta älv has undergone major expansion. Residential areas, university buildings and several industries (including Volvo) have largely replaced the former shipyards.

Hisingen comprises many different neighbourhoods — Kvillebäcken, Backa and Biskopsgården are only some examples. At Jubileumsparken in Frihamnen, an area bordering the Göta älv, there is a public open-air pool and a spectacular sauna. Further inland you’ll find the beautiful Hisingsparken, the largest park in Gothenburg.

Apartment prices are still relatively low in certain parts of Hisingen, while the housing market in other neighbourhoods is booming. The average metre-squared price on Hisingen lies around 41,000 kronor.

Gamlestaden or the Old Town was founded as early as 1473, 200 years before Gothenburg’s current city centre was built. You can take a seven-minute tram ride towards the northeast to this upcoming district (popularly known as ‘Gamlestan’) which, like Majorna, is characterised by the original Landshövdingehus in combination with an international atmosphere.

What was once an industrial centre, mostly the factory of bearing manufacturer SKF, is now rapidly turning into something new, as restaurants and vintage shops move into the old red-brick factory buildings.

The multicultural neighbourhood is also close to the famous Kviberg’s marknad (market) and Bellevue marknad, where you can buy everything from exotic fruits and vegetables to second-hand clothes, electronics and curiosa.

The Gamlestaden district is developing and should become a densely populated and attractive district with new housing, city shopping and services. In the future, twice as many inhabitants will live here compared to today, according to Stadsutveckling Göteborg (City development Gothenburg). Around 3,000 new apartments should be built here in the coming years. The current price per metre squared in Gamlestaden is 46,000 kronor.

It might not be the most practical, but it probably will be the most idyllic place you’ll ever live in: Gothenburg’s northern or southern archipelago (skärgården). With a public bus or tram you can get from the city centre to the sea and from there, you hop on a ferry taking you to one of many picturesque islands just off the coast of Gothenburg.

There are car ferries from Hisingen to the northern archipelago. Some of the islands here are also connected by bridges. The southern archipelago can be reached by ferries leaving from the harbour of Saltholmen.

Gothenburg’s southern archipelago has around 5,000 permanent and another 6,000 summer residents. The archipelago is completely car free and transportation is carried out mostly by means of cycles, delivery mopeds and electrical golf carts.

Most residences here are outstanding — wooden houses and cottages, big gardens — and always close to both nature and sea. Finding somewhere to live, however, is not necessarily easy. Some people rent out their summer houses during the other three seasons. When buying a house here (the average price being 5.5 million kronor) you have to be aware that living in a wooden house on an exposed island often comes with a lot of renovating and painting.

POLITICS
EXPLAINED: What do proposed changes to Sweden’s rental laws mean for tenants? 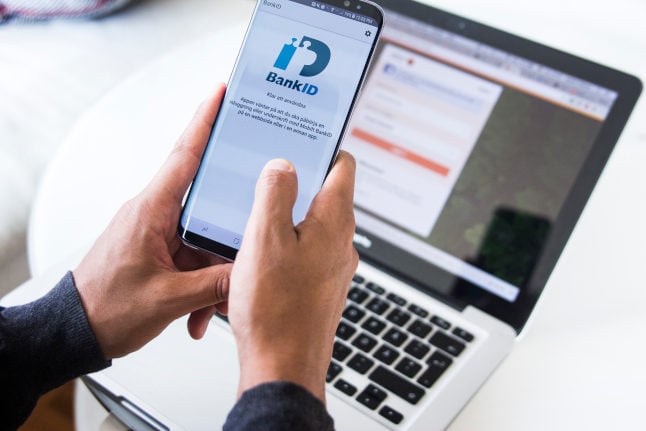 MEMBERSHIP EXCLUSIVES
Everything you need to know about Sweden’s BankID and its alternatives
Url copied to clipboard!