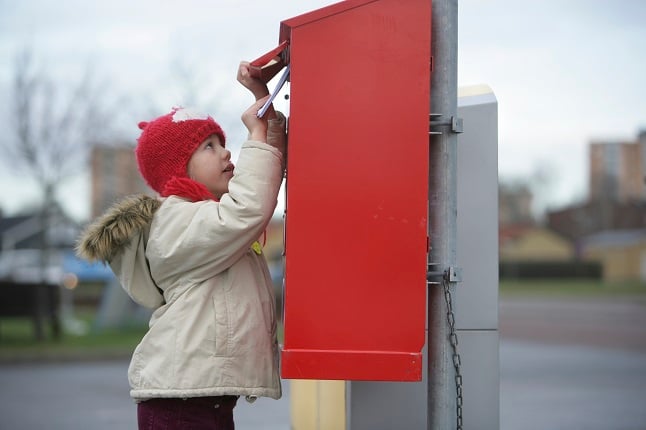 Here's what you need to know to ensure your holiday post and parcels reach their recipients. Photo: Fredrik Sandberg / SCANPIX/TT

Swedish postal service Postnord is anticipating handling a record number of parcels over the festive season.

To cope with the increased workload, Postnord has hired an extra 3,000 staff across the country for the festive season. And an extra 2,000 postboxes just for Christmas cards have been set up around the country.

Postal service points for large packages will be open longer than usual in many areas. And during the entire period from Black Friday to Christmas, Postnord will sort parcels on Sundays (which doesn't happen during the rest of the year) and deliver parcels on Saturdays in some parts of the country.

To encourage the tradition of sending Christmas cards, Postnord produces specially designed festive stamps each year, which are slightly cheaper (by half a krona) than usual stamps but have a longer than average delivery time. You cannot use these to send letters overseas though.

December 12th is the final day to send letters within the EU (or to Iceland, Norway or Switzerland) for guaranteed pre-Christmas delivery, and you'll need to send them first class for this to apply. This is also the final day to send parcels to any of these countries, but for parcels sent within Sweden you have up until December 20th, depending on exactly which service you use. You can read more about the final dates here.

Get the names right

You'll want to make sure your friends and relatives can actually get their hands on any Christmas goodies you send, and in Sweden this can be more complicated than you may expect.

If you're sending parcels within Sweden, the recipient will typically need to collect them from a post office or local shop that handles package deliveries. They will need to show ID when picking up their parcel.

This means that nicknames, even common abbreviations, are best avoided. The postal service has a reputation for being sticklers for the rules on this issue, so if you go by a name that's different from the one on your ID, make sure to inform any friends or family who might be posting gifts.

It's best to avoid addressing parcels to children or pets for the same reason, since it's the named recipient's ID which would be checked. So if you're sending Christmas goodies to a child in Sweden (or even to a pet), name their guardian on the parcel — you can always include the child's name elsewhere.