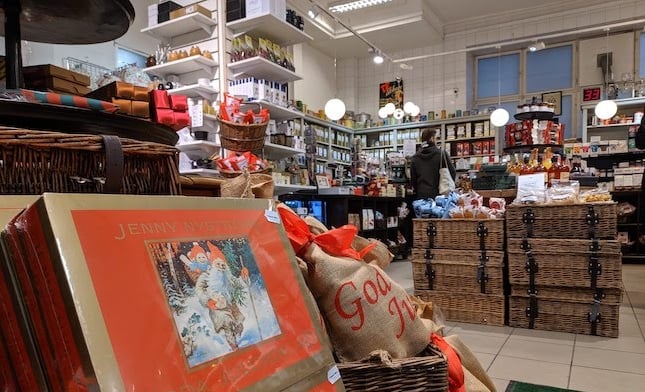 From Italian panettone to a Christmas turkey to Polish desserts, here's where to find international Christmas food. Photo: Tim Marringa

Reader Linde suggested Wijnjass on Bergsgatan in Stockholm for hunting down delicacies including great Italian wines to complement your Christmas meal.

For sweets and cookies, the store Amaretti Virginia in Gamla Stan is a cozy place with shelves are full of brightly coloured classic packaging. “We import premium products from the Liguria region. My father-in-law is from the village of Sasello in the north of Italy. That's how we got in touch with the Italian culture,” one of the owners, Jacqueline, told us. “The panettone is the favorite Italian treat for Christmas. Soft and sweet, the perfect stylish cake for the holidays. It's a symbol of getting together with the whole family and sharing the panettone,” she said. “Last year we sold eighty cakes before Christmas, this year I ordered two hundred, and they are going fast.”

Eataly in Stockholm and Lidl stores all around the country also have an excellent panettone, recommended by The Local's readers.

And for anyone in Gothenburg wanting to add an Italian flavour to Christmas, restaurant Enoteca Maglia sells Italian ingredients as well as serving food.

If there's one thing the French are known for, it's their fantastic bread. Bakery Petite France is popular through the year for its croissants and other goodies, but in the winter months the place is also the home of the Bûche de Noël or the French Yule log cake, a sponge cake with chocolate buttercream.


In Gothenburg, Sylvain Marron offers a small and sweet part of France in Sweden. As well as chocolates in a wide range of flavours, this is a spot to pick up baked desserts to add to the festive menu. Tea House Java in central Stockholm sells delicacies from all over the world, including many local products from Sweden and the classic Christmas pudding, as well as British desserts such as shortbread.

Also in Stockholm, the British butchers Taylors and Jones were recommended as a one-stop shop for everything for a great British feast during Christmas, including the turkey. At the Little Britain store in Gamla Stan, it's possible to buy mince pies, Christmas puddings and fruit cake, as well as Christmas crackers. And a similar offering is available at Gothenburg's British Shop.

The Pavo Trufado de Navidad is the Spanish variant of the stuffed turkey, filled with truffles and serrano ham and served with fresh pineapples and orange. Dennis Kött in Spånga near Stockholm is known for its high-quality meats, including the famous Christmas turkeys. Be sure to buy in time, because these birds fly fast during the holidays.

In some parts of Spain, Christmas is all about the seafood. Despite its French name, Grand Gourmet in Stockholm imports quality products from Spain including fresh fish and crustaceans, cheeses and cured meats. Salmantinos delikatesser, also in Stockholm, focuses on restaurants but also sells their products to private customers.

One of the top products in the store is the Jamon Iberico (Pata Negra). The meat from black Iberian pigs sold here is from the Spanish regions of Andalusia, Extremadura, and Salamanca. Because the leg of the pig is still intact, it's a spectacular addition to a festive feast.


Also on offer are snacks and desserts such as Turrónes, a sort of nougat with honey, sugar and egg white, mixed with nuts.

A German Christmas wouldn't quite be complete without krautstrudel, Christmas lebkuchen cookies and plenty of meat. At Österqvist Delikatesser in Hötorgshallen in Stockholm, one of Sweden's oldest delis, you'll find different kinds of German sausages, dried meat and products like sauerkraut, spätzle and kartoffelklösse.

The Wine Room at Hangövägen offers a Katzenhütte Glühwein for anyone who prefers the German take on mulled spiced wine to Swedish glögg.

Meanwhile, if you want some classic German lebkuchen at your festive gathering, Stockholm has two bakeries specializing in German products Tyska Bageriet and Der Berliner Bäcker.

The traditional Polish Christmas dinner, called Wiglia and eaten on Christmas Eve, excludes meat and has twelve different dishes, just as there were twelve Apostles. The Polish kitchen is known for two specific recipes. The first is borscht, an iconic eastern European beet soup. The second pierogi, filled dumplings that can be eaten with every meal, and both feature during Wiglia.

There are a few shops in Stockholm specializing in Polish delicacies. Polska Delikatesser is a little store that sells all kinds of Polish products, and you can try and taste different things here before you buy. The shop Polen Specialisten has three stores in and around Stockholm. The store has a large selection of Polish foods so if you plan on making twelve different dishes for a Wiglia Christmas eve, this place should have all you need.

And another option in the capital is the PolFood – Kött & Chark store. They combine local production according to their own recipes and a hand-picked selection of products from the Polish market. Fresh sourdough bread, sernik (Polish cheesecake), makowiec (poppy seed cake), pączki (berry donuts with apple), and traditionally smoked Polish sausages are just a taste of what's on offer.

Many of the food traditions in the US have a British origin, and just like on Thanksgiving, the centerpiece of an American Christmas dinner table is a turkey.

In Stockholm, Lulles is a high-quality butcher selling every kind of meat you can possibly think of. Fresh game from different parts of Sweden such as moose, deer, deer, wild boar, reindeer, bear and hare. But you can also get turkey here.

In Malmö, one option is Ola och Ko, selling meat and poultry from surrounding producers and farms in the immediate area.