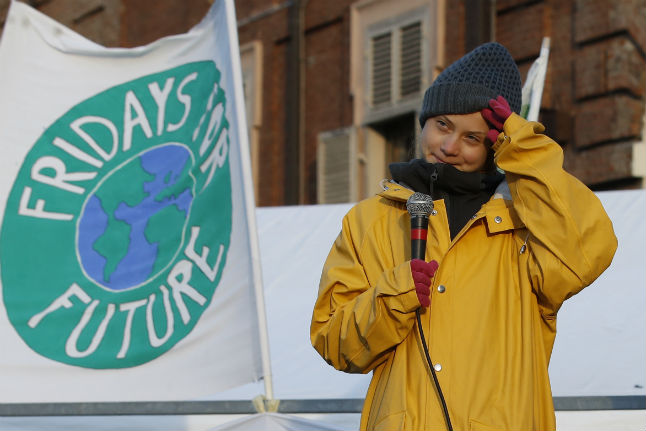 Greta Thunberg made her slip up during an improvised speech in Turin. Photo: Antonio Calanni/AP/TT
In a speech in Turin, Italy, on Friday, Thunberg rued the looming failure of climate talks in Madrid.
“World leaders are still trying to run away from their responsibilities, but we have to make sure they cannot do that,” she said. “We will make sure that we put them against the wall, and they will have to do their job to protect our futures.”
The phrase “against the wall”, is a direct translation of the common Swedish phrase “ställa mot väggen”, which means to “hold someone to account”.
But it was quickly misinterpreted as calling for world leaders to face the firing squad.

Not sure these children are a future anyone should want pic.twitter.com/UhVSgtkhvR

On Saturday, Greta apologised for her rare misstep in the English language.
“That's what happens when you improvise speeches in a second language,” she said on Twitter. “Of course I apologise if anyone misunderstood this. I cannot enough express the fact that I – as well as the entire school strike movement – are against any possible form of violence. It goes without saying but I say it anyway.”

Yesterday I said we must hold our leaders accountable and unfortunately said “put them against the wall”. That’s Swenglish: “att ställa någon mot väggen” (to put someone against the wall) means to hold someone accountable.
That’s what happens when you… (1/2)

… improvise speeches in a second language.
But of course I apologise if anyone misunderstood this. I can not enough express the fact that I – as well as the entire school strike movement- are against any possible form of violence. It goes without saying but I say it anyway.

While Swedes are generally excellent speakers of English, they do make a few common mistakes.
READ ALSO:
The phrase “ställa mot väggen” is very common in newspapers and political speeches.
In Saturday's edition of the Dagens Nyheter newspaper, for instance, the therapist Carina Bång said that when dealing with a drug addict, it seldom works to “ställa honom mot väggen” and try and force him to confess to his problems.
She wasn't suggesting that the addict's partner was considering having him shot.
When Swedish public television channel SVT wrote in October that Moderate leader Ulf Kristersson had “taken the opportunity in parliament to “ställer [Prime Minister] Stefan Löfven mot väggen”, they did not mean he had had him summarily executed in the debating chamber.
And in September, when reality TV star Emilio Ingrosso told Aftonbladet that in a meeting with his sister's boyfriend, Phillipe Cohen, he planned to “ställa honom mot väggen”, he wasn't making a violent threat.
Thunberg is currently on her way back from Italy to Sweden where she plans to take a break from her campaigning.

Traveling on overcrowded trains through Germany. And I’m finally on my way home! pic.twitter.com/ssfLCPsR8o