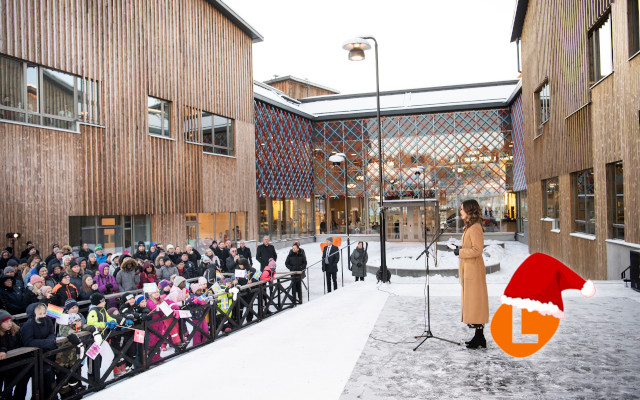 Sweden's Princess Sofia, who is from the area, pictured at the opening of a preschool set to teach Elfdalian. Photo: Pontus Lundahl/TT

Elfdalian sounds like a language that might be spoken by mythical creatures in a fantasy world, but in fact it's spoken in central Sweden.

It's a North Germanic language with roots in Old Norse, just like today's Swedish. But since the Middle Ages, Elfdalian (known as Övdalsk in Elfdalian or Älvdalska in Swedish) developed separately to standard Swedish, and it contains many features that are so old they have been lost from all the other Scandinavian languages. It has none of the letters C, Q, X or Z, except for in names or foreign loan words.

It's more similar to Icelandic than the Swedish you'd hear on the streets of Stockholm or Gothenburg, and used runes longer than anywhere else, until 1929. While speakers of some parts of Sweden, Denmark and Norwegian can often understand each other when talking in their native languages, there is no mutual intelligibility with Elfdalian.

In the middle part of the 20th century, children were discouraged or even banned from speaking Elfdalian at school, even though at that time some had spoken no other languages. But from the 1980s, efforts began to revive the dying tongue.

Today, the language is spoken by around 3,000 people in the Älvdalen area of Dalarna County in Western Sweden.

But that's not all.

In 2016, there were fewer than 60 children in Sweden who understood Elfdalian and the language looked set on the path to extinction. So politicians voted that year to set up a new preschool in the remote town, and to teach their language to children from the ages of six to 18.

Campaigners have also translated popular children's books into the local language, and arranged for Elfdalian words to be included on signage.

The following year, a course in the language was offered to a select number of international learners for the first time, in the hope of raising Elfdalian's profile. The week-long course included grammar and vocabulary lessons as well as conversation practice with older speakers of the language.

The Swedish government still treats it as a dialect, but campaigners want recognition of Elfdalian as a language, and were given a boost in May 2016 after being assigned an ISO language code. The codes, used to compile lists of the world's languages, help the internet classify what is or is not a language.

So, can Elfdalian survive? It's managed to stick around since the time of the Vikings, so don't rule it out.

PROPERTY
How to buy an apartment in Sweden, step by step
Url copied to clipboard!