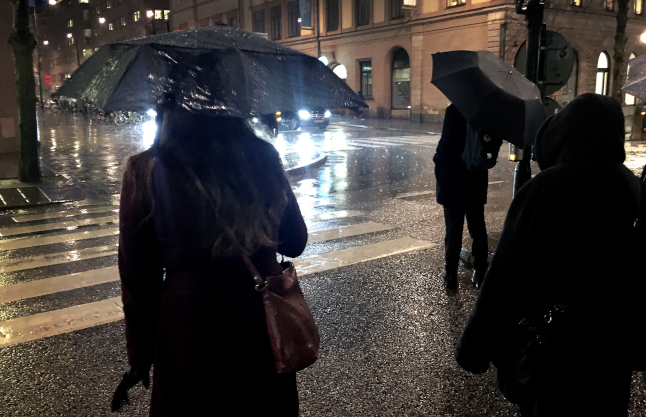 Is this what your December has looked like? Photo: Janerik Henriksson/TT

Does it feel like it has rained more than it snowed this month? You may be right.

Central Swedish region Svealand, which covers the area around Stockholm as well as Dalarna, Närke, Södermanland, Uppland, Värmland and Västmanland, has had almost twice as much rain as normal.

The town of Ullared in western Sweden is the worst off, with 174 millimetres of rain so far this month.

In fact, only southern Norrland and the southern parts of the Lapland mountains have had less precipitation than normal this December, and that's only by a small margin.

With less than a week to go to Christmas Eve, there's bad news for snow lovers in southern Sweden.

“It doesn't look great. If you're in Svealand and want a white Christmas you had better get to the northern parts of Värmland and north of Lake Siljan in Dalarna. Otherwise, Norrland is the place to be, in particular the mountains and inner parts of Norrland are your best bets for a white Christmas,” Alexandra Ohlsson, meteorologist at Sweden's national weather agency SMHI, told newswire TT.

The newswire was so fascinated by the lack of snow on Wednesday, it even went through the effort of calculating how much snow would have fallen, had Sweden had snow instead of rain this month.

“If the temperature is one or two degrees below freezing, you can count one centimetre of snow for each millimetre of rain,” explained SMHI meteorologist Charlotta Eriksson.

So if everything else remains equal – that means that if Sweden had had a really cold December this year, Uddevalla would have had ten metres of snow by now, according to TT's calculations. Merry Christmas.